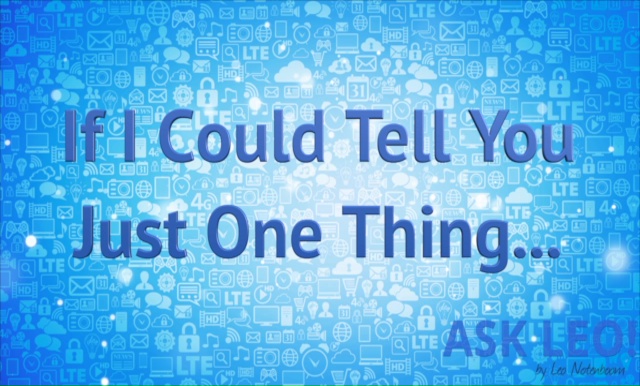 I was asked to talk a bit about computer security the other day, and that got me to thinking about what's important, and how I prioritize what it is I would want people to remember.

Continue Reading: If I Could Tell You Only One Thing...
https://askleo.com/22985

What Should I Do When My Account Is Involved In A Breach?

I received 2 notices below concerning my e-mails (Yahoo & Google) being exposed. I changed passwords on both. Is this common? If it reoccurs what are my options? I have a lot of information stored in e-mail accounts is there a back up application before getting new accounts?

This has happened to me as well.

I want to be clear: normally, this does not mean your accounts have actually been hacked.

However, depending on the specifics of the breach, and your own security habits, it could mean your account is at risk.

Your initial response to change passwords was correct.

Continue Reading: What Should I Do When My Account Is Involved In A Breach?
https://askleo.com/22845

Can a Defrag Cause Data Loss?

My computer was getting slow and I had not defragmented the drive in a year, so I set myself to the task. I used a third party program that was faster and used less system memory than Windows defragger. The defragger "Defraggler" worked flawlessly on my computer.

I had an external drive, which I decided to defrag. Defraggler would not work on the external drive, a USB drive connected to my computer, which is a laptop. So, I went looking for a way to defrag my external drive and found your site. Someone had asked that question, and I followed your instructions to right-click the drive and select defrag from the menu, and Windows defrag would defrag the drive. The external drive had only 10% of the drive's size in data, but if I remember right, defrag does not distinguish between data and empty portions of a hard drive.

I set defrag to work using another 3rd party program called "No Sleep", which simulates a person moving the cursor, so the computer doesn't shut down. Then I went to bed. When I awoke the computer was hung up, and I had to back out of defrag. When I looked at my external drive almost all of the data was gone.

The external drive was a backup of sorts, and it was not itself backed up. I hadn't gotten around to that. So, hundreds of hours of work was lost. I started by going back on the web and found an article that warned that Windows defrag often hangs up on large drives. My external drive was a terabyte in size. The lack of warning for this on your site led to the loss of my data.

I have 8 recovery programs, all third party, which I rarely use. Six of them could not recover anything. The seventh recovered everything. So, I'm whole. But you need to add a warning in your instructions to warn people that Windows defrag has problems with large drives … and maybe small ones. I never have used Windows defrag since I was alerted to the existence of third party programs that do a better job of defragging.


I'm sorry you had such a time of it, and I'm very relieved you were able to recover your data.

Unfortunately, there's really no warning for me to add, other than what I already repeat ad nauseum: if there's only one copy, it's not backed up. Your data was already at risk: the drive could have failed at any point and it would all be gone.

In fact, I suspect that something like that was bound to happen. Defragging a drive should never cause data loss, unless there's a pre-existing underlying problem.

Continue Reading: Can a Defrag Cause Data Loss?
https://askleo.com/22837

To defragment a disk drive is to physically rearrange the contents of the files stored on the disk so that they can be accessed more efficiently.

The information stored in a single file may not necessarily be stored in one place. For a variety of reasons the data may be scattered in fragments kept in various locations around the surface of the disk. The file system keeps track of where all the fragments are so that when we use a file it behaves as one single thing.

Traditional hard disks involve actual moving parts, so a file that is scattered around a disk's surface will be slower to access than one where all the pieces are near each other. Defragmenting simply rearranges the pieces of files such that they are not only near each other, but also in order, so that reading the file can take place as quickly as possible.

Disks without moving parts – such as flash drives and SSDs – typically do not benefit from defragmenting.

"Another reason is that they feel forced to use Microsoft Windows as it is the OS which comes reinstalled on close to 90% of all computers sold to the public. Using Google, Yahoo and Facebook are all choices people make." - It's extremely easy to buy a device that uses OS X, Chrome OS or even Linux rather Windows. Nobody is forced to use Windows any more than they are forced to use Google, Yahoo and Facebook. The fact that Windows is preinstalled on 90% of devices sold is simply because 90% of people want a Windows device. Supply and demand.....

"I think one thing which rightfully upsets people about Microsoft is that people are paying for their product and feel that a paid product shouldn't be gathering information like that." - And they feel that way because of the clickbait FUD pushed out by the media and propagated by frothing-at-the-mouth tinfoil hat-wearing lunatics.

No, Windows 10 is not spying on you. Nor is OS X. Yes, both OSes send some information back to Microsoft and Apple, but it's not for the purpose of spying. On the contrary, the data is used for the benefit of users. OSes are no longer designed to be simple system used is isolation; they're designed to be cloud-integrated and to use big data, machine learning, heuristics, etc. to deliver a better, more relevant and more personalized experience. Which is exactly what the majority of people want.

Sure, there's a privacy trade-off, but it's a trade-off most people consider to be worthwhile. And if somebody doesn't consider it worthwhile, they can simply turn those features off.

I think that's because people are stuck in their ways and don't want to learn new things. I got a new computer with Windows 10 pre-installed. I turned it on and went through the usual Windows setup such as choosing a user name, etc. And just started using it. Pretty soon I found out it was just the same as Windows 7. Start menu was more or less the same, except tiles instead of program names. I figured it wasn't worth my time to make it try to look and work the same as Windows 7 or XP. I had more important things to do than worry about cosmetics.

Thanks again for publishing that list. I couldn't concur more. About two weeks ago my partner had intentionally reset his computer because it "wasn't working right". Unfortunately, when he did that, of course all of his desktop icons and folders went missing and a lot of data was not the same as it had been even though supposedly just "resetting" in windows 10 preserves data and programs, etc.

Luckily, I have become a fanatic about backups. I do several different kinds of back ups including an online one and one that I take off site when we go on vacation. Because I do backups, and they are full back ups with Macrium Reflect (thanks for recommending that also) I simply took the most recent back up that I had made, which was only 2-3 days old and totally restored his whole "C" drive. Everything was perfect. Since I hadn't done anything like this in a while, I had to reeducate myself about booting to that Macrium Reflect bootable media, because one can't restore a drive that one is currently using. Nevertheless it was a snap and saved a lot of time and work.

Getting Into the Search Engine

You have content, and you want to be found. Making sure you can be found is critical.

Read: Getting Into the Search Engine