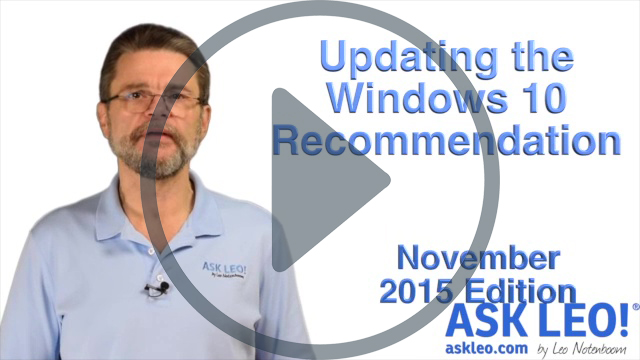 How do I adjust the brightness of my screen in Windows?

How do you reduce the brightness of the monitor in Windows 7?

Well, to be blunt … more often than not, you don't.

At least, you don't adjust it in Windows. Brightness, along with a few other settings, is typically adjusted elsewhere. Though, of course, that's changing as well.

Continue Reading: How do I adjust the brightness of my screen in Windows?
https://askleo.com/6053

What's the difference between SATA and PATA and IDE?

This "SATA" stuff is new to me. What does it mean? It's something about hard disk drives, I know, but I don't understand what. I went to get a new hard drive for my machine and the one that I wanted was SATA. But when I told the salesperson what computer I had, he said I didn't want it and instead, I needed something called PATA or IDE? I'm very confused.

Well, one part of this is easy: IDE and PATA are two names for the same thing.

The rest – well, the easy part is that SATA and PATA are two different ways of connecting a hard drive to your computer. Your computer will have one or the other, and what you purchase must, in general, match.

When we go further, however, things start to get a little complex.

Continue Reading: What's the difference between SATA and PATA and IDE?
https://askleo.com/4968

Why testing your backups is critical

If your data is important to you, you need to invest in reliable software and some time to use it and then test it. The operating system can always be restored even if you have to buy it, but your data is unique to you and as such, irreplaceable. I have tried the free version, and eventually the paid version of EaseUs. After a couple of years I gave up on it because of errors. Then I tried Macrium Reflect. The free version works fine, if you are willing to live with the limitations. I have, for the last three years, used the paid version. For the money, it is worth its weight in the value you put on your data. I have used it after hard drive failure, and worked flawlessly. I have used it to recover files and folders. I have used it just to check some old file that I needed to compare to my current version. It is easy to use and is reliable. Even if you don't have any precious data that you want to back up, making an image of your system regularly pays off. If your hard drive fails, you can recover from the most recent backup. If you acquire a new computer, you can restore your old data to the new one. In any case, the few bucks you pay for the software is far less than the time and frustration when you use unreliable software to back up your stuff and see failure.

I have a paid subscription to DropBox and use it as the real My Documents with everything from my computers on it. All three have all my data and my Windows 8.1 Tablet has a subset. But I still have an image backup and scheduled incrementals for all three computers as it takes a few days to get my computer loaded up with programs and settings the way I like them.

I have saved all your articles since #511. I search back from time to time to help me solve problems. Your suggestion to approach computers with the attitude to "have fun" is what I have tried to do. I never have had the benefit of formal training with either hardware or software. I'm pushing 80 and have yet to pay anyone for help. I've enjoyed the challenge of every problem I've had and resolved with my many pc's plus the one I built a few years back. You often encourage senior citizens not to fear computers and change. I am an example of those unafraid and looking forward to the challenges. Windows 10 is next.

Thank you Leo for all the encouraging words of wisdom,

I am in my senior years and spend a lot of time on my computer.

Recently I upgraded to Windows 10 and really like it,I still have two older computers running with Vista Home Premium and looking forward to your next issue of a possible upgrade to Windows 10,if possible.