Technology in terms you understand. Sign up for the Confident Computing newsletter for weekly solutions to make your life easier. Click here and get The Ask Leo! Guide to Staying Safe on the Internet — FREE Edition as my thank you for subscribing!

Thank You! (For being here) 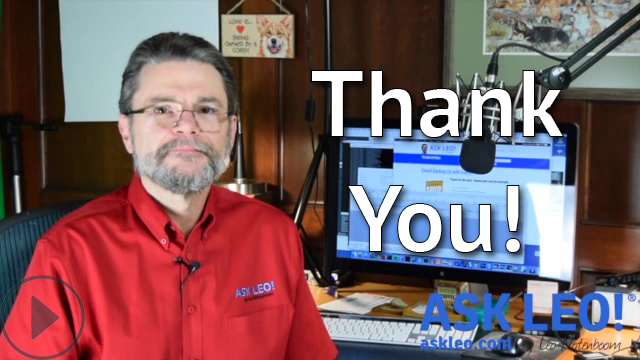 Continue Reading: Thank You! (For being here)
https://askleo.com/20785

Why am I getting email from someone with the wrong email address?

Recently, while I was away on a business trip, my wife received this email:

I've used asterisks to obfuscate a few things, but the essence is this:

Because we communicate a fair amount by email when I travel, she thought it was from me and clicked the link.

I've been getting lots of reports of this particular scenario lately.

I'll describe what I did next and what this appears to be… and perhaps reassure you a little about what it is not.

Continue Reading: Why am I getting email from someone with the wrong email address?
https://askleo.com/5810

Can I restore an image backup of one computer onto another and have it work?

It's not a question of "allowing".

By definition, restoring a full image backup will completely overwrite everything that exists on the hard disk, replacing whatever was there before, no matter what it was.

So, sure, the previous operating system, along with everything else on the hard disk, will be overwritten and replaced with the contents of the image backup.

The real question is: will what you've just restored then work?

Most of time, the answer is a very short "no".

I'll explain why that is.

Continue Reading: Can I restore an image backup of one computer onto another and have it work?
https://askleo.com/4751

There are, of course, nuances to and even disagreement on the term's meaning.

An image of a hard disk most commonly refers to a copy of all files, folders, and overhead information stored on the disk, including the information required to boot.

Another definition used less frequently is that an image is a copy of every sector on the disk, including those that are not used, as well as their physical layout. This is more commonly referred to as a "clone".

An image by the first definition is all that is needed for backup purposes. When restored, the files are replaced on the hard disk, but not necessarily in the same physical locations as they were originally. (One positive side effect is that often a restored hard disk has no fragmentation.)

The second, when restored, places all files in exactly the same physical location as the original and restores all unused sectors as well, thus enabling deleted-file data recovery and potentially other forensic techniques.

I build and maintain about 10 computers for myself, family, and friends. Windows 10 has had trouble on both of my oldest machines which use 1st generation quad core LGA775 CPUs. Windows 10 initially upgraded fine, but later got into endless loops when trying to boot. I was able to resent one of the machines successfully, but am still having trouble with the second and may have to go a Windows 7 image backup if it's still intact on my external drive. I would be very cautions upgrading to windows 10 on machines of the LGA775 and DDR2 era.

Upgraded my desktop to Windows 10 and after 2 weeks reverted back to Windows 8.1. The major issue I had is the Internet connection became very very slow. I am in China, with huge censorship, and could not access even with VPN most sites due to slow Internet. My laptop is upgraded to Windows 10 and passed the time to revert. I went on vacation to the Philipines in September/October and had a really hard time keeping a decent connection to the Internet. My iPhone was OK but the laptop with W10 dragged, lost connection, really really slow. I am holding the upgrade on my desktop until things get better. And I am considering a fresh install of Windows 8.1 using the original CD. In the first try it did not allow me to install. It seems I need to format the HD first then install. There is something in W10 installation that refuses to downgrade using the W8.1 CD.

I had a similar thing with my brother-in law's machine. He went to 10, found some software he used wouldn't run in it, and when we rolled back to Windows 8, it kept freezing. In this case I had made an image before the upgrade, so we were able to rescue him. As you say, having an image avoids that 30 day deadline too. With 4 computers in our house, we changed without any issues, though on one machine I had to change the version of Windows 7 from 32 bit to 64 bit to match the CPU.

My four year old HP Laptop did not like windows 10 browsing was really sloooow. I tried all the fixes on the internet blogs but none worked. I called HP they confirmed that my machine was NOT suitable for windows 10 due to outdated drivers. I went back to windows 7 and all is well again. If it aint broke dont fix it