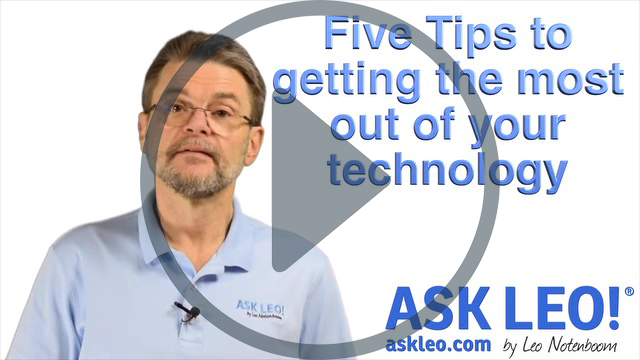 Why testing your backups is critical

I wrote to suggest, …, that you write an article IN CAPITAL LETTERS if necessary that verifying a back-up is exigent. Exigent.

As you might expect, after doing this for over a decade, there are individuals that I hear from fairly regularly, and whose names and/or email addresses become quite familiar to me. Over time, they start to feel like extended family.

This comment came from one of my long-time readers – a member of that family – after she detailed a story of … well, it really all boils down to this heartbreaking statement:

I had FIVE YEARS' worth of files backed up in multiple places […]. Leo, I am astonished–just mind-blowingly astonished: while both [external drives had] backed up random, helter-skelter, files–sometimes redundant to the point of absurdity–BOTH did not make a back-up.

She experienced a failed Windows 10 upgrade, and restored to Windows 7 only to find that massive amounts of data had been lost in the process.

A member of the family requests that we all learn from her painful experience.

Continue Reading: Why testing your backups is critical
https://askleo.com/20591

How do I create a new partition on my hard drive?

If you have enough free space on your C: drive, then creating a new partition is actually pretty simple.

Continue Reading: How do I create a new partition on my hard drive?
https://askleo.com/20623

A partition is a division of the area on a physical hard disk (or disk-like device).

In many systems and on many disks, the two are effectively synonymous: a single partition is constructed that encompasses the entire available space on on a hard disk.

Dividing a hard disk into multiple partitions is simply a method of organizing the available physical space. A single 100GB drive, for example, could be divided into two partitions of 50GB each (ignoring overhead). Once formatted, these two divisions could be mounted as two separate volumes (perhaps C: and D: in Windows), when in fact there is only one physical drive.

Partitioning is commonly used by computer manufacturers to place data, such as a pristine system image or other installation media, onto a hard disk when an operating system is pre-installed. A small partition ' typically hidden, so as not to be visible by default ' is created to contain this recovery information, and the remainder of the disk is set up as a separate, visible, partition.

Confused!! I have your Macrium book. Now your showing us EaseU TODO. Which should I use Macrium or Ease TODO ?

Which ever is working for you. Both are good / recommended.

What is peer-to-peer file sharing, and is it legit?

Still a bit confused. So where do these downloaded, available files sit on your computer that all the others have access to. In a separate folder?

And does that mean all the others in this network have access to your computer? Doesn't sound very safe to me.

They're in a separate folder set up by the file sharing program. NO, others do NOT have access to your computer.

What Backup Program do You Use?

After reading your latest post on EaseUS Todo, I once again downloaded it and gave it a try. It has a few features, such as incremental backups, that is not available in Macrium Reflect in the free version.

I found it to be twice as slow in imaging my 500 gig hard drive to my external drive compared to Macrium, and caused the processor fan to really crank up, confirmed by task mgr showing heavy CPU usage. No other program was running during the backup process. This same result happened last year with an older version of EaseUS, and I abandoned it for Macrium with very good results. Hav you encountered the same problem? EaseUS claims that the free version runs very slowly and you mus by the upgrade for speedier backups. Would love to hear your retake on this.

I have not personally encountered that, but I've heard of it. If Macrium works for you, though, I'm not sure I'd change.