Chomping at the bit for Windows 10 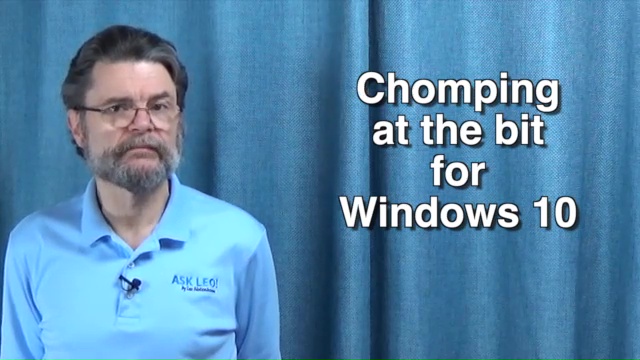 Continue Reading: Chomping at the bit for Windows 10
https://askleo.com/19783

How can I tell if my email has been blocked?

The ultra-short answer is: you cannot tell. There's simply no way to know for sure.

Let's explore why I say that.

Continue Reading: How can I tell if my email has been blocked?
https://askleo.com/3177

Can I delete pagefile.sys? What is it?

How to delete pagefile.sys. Is it safe to delete?

Sure, you can delete it. It takes some special steps, but it's not really all that difficult.

The issue is that you probably don't want to.

Continue Reading: Can I delete pagefile.sys? What is it?
https://askleo.com/15171

Virtual memory is simply the operating system using some amount of disk space as if it were real, RAM, memory.

Exactly how virtual memory is implemented is complex, but as an over-simplification:

Also remember that the operating system itself is just a program. It will need memory too. It can allocate memory to itself and its memory may get swapped out to disk as other needs arise.

(This is an excerpt from the lengthier Ask Leo! article: What is Virtual Memory?)

How do I make the Windows 10 offer icon go away?

When Windows 10 is installed, will I be able to run Windows 7 along side 10?

Or will 10 over write 7? It would nice to be able to do a side by side comparison

before I deside to go to one or other.

Thanks Leo. It's such a good thing that there are still people like you.

If you upgrade to 10 it will overwrite your current OS. The only way to run them side by side (so to speak) is to run one in a virtual machine. Here's an article that explains that: http://ask-leo.com/virtual_machines_what_are_they.html

Are we having fun yet?

This was a great idea, Leo.

I use Google Earth to track & revisit the places I traveled to in Southern Africa and Great Britain, and to explore in street view places I haven't been. The Adobe Suite - especially Photoshop, Premiere, After Effects and Audition are used extensively both professionally and for fun. And I like sharing photos and videos on Flickr and Facebook, as well as seeing what other people are shooting. And of course there's You Tube, Crackle, and all kinds of other television network feeds.

What happens when I die?

A couple of observations. 1) There is no single solution which is applicable to everyone. What works for me, married to the same woman for over 30 years, isn't going to be relevant to a guy in his twenties with a different girlfriend every month 2) We aren't talking about a backup strategy for your PC. Regularly securing your half terabyte of selfies, pirated films or the next great American novel is something you need to do regardless. We're focusing on the things your relatives and friends will need to be able to access QUICKLY if you drop dead, and also information that isn't readily discoverable even if someone can be bother to work through half a terabyte.

My wife and I have a Word file called "InformationAndCopingVn.n"

The purpose of this document is:

• To document the family finances (bills, bank accounts, superannuation accounts etc) so that if either or both of us should pass away or become ill then the family will be able to manage things properly

We update it every few months (changing the Version number) and each have a copy. It identifies key IT information: the password to my PC, where on the PC is the plain text file that lists my accounts and passwords, and what the file is called. (As a nod to security it's called an innocuous name - not passwrds.txt - and lives in a "Miscellaneous" directory with lots of rubbish.) And it contains the same info for my wife. Our kids know the document exists and know to look for it in the top drawer of my filing cabinet, if the need ever arises.

As for backup, I secure to external media - a couple of memory sticks which I rotate, with new ones every twelve months. I keep them in a small fireproof safe ($250) in the shed at the bottom of the garden.

As Leo said, the critical thing is to find someone to trust. The second critical aspect is to write down the information which will be useful. This planning is not primarily a technology problem

July 3rd wrestled with a seriously recalcitrant Trojan on a customer's Win 8 machine, which she had purchased from Staples as a floor model. It apparently had been used by Staples as a demo for several months, including access by their customers, who screwed it up. Firefox had been installed at Staples but from a "rogue site" which infected the machine. Then, they [Staples] loaded Trend Micro plus AVG plus a couple of other "freebie" anti-malware programs, all at the same time, before deciding to unload the problem on a naive customer.

I dug out everything and finally managed to install Vipre Internet Security which promptly caught and quarantined many copies of the same Trojan plus hundreds of adware PUPs. I ran several deep scans, only to have the Trojan get caught each time. What I finally figured out was that Microsoft Skydrive had been setup, not used by the purchaser, but the infection was hiding files in Skydrive on Microsoft cloud servers! That is beyond the reach of any anti-malware program scanning on a local machine... I uninstalled Skydrive, scanned twice more and am no longer getting "hits" for that Trojan...

The right solution in a case like this, IMO, is to wipe the computer and reinstall the OS from scratch. There's simply no way to know what has been done to a floor model, and with so many people having access to it over the months it's certain that whatever was done wasn't good. I'd never accept a computer from anyone without the ability to install from scratch or restore it to a pristine condition.