In fact, if you already own Saved! Backing Up with Macrium Reflect first edition, you already own the second edition as well! Just visit the members-only site for registered book owners to get access to the digital downloads.

Your feedback made it better!

A while back I asked for your feedback on how to make the book better, and you came through! I want to share with you the results of that request and it directly impacted the second edition. Click here for Saved! Backing Up with Macrium Reflect - Reader Feedback, a short video where I walk through some of the changes made in the second edition as a direct result of your comments.

If you don't yet own Saved! Backing Up with Macrium Reflect, the best value - by far - will be to purchase the first edition before it gets taken off the shelves. You'll automatically get the digital copies of the second edition as well. The price is changing, and as I said, you'll get the most for your dollar simply by purchasing the first edition out at the Ask Leo! Store.

The magical power of CTRL+S 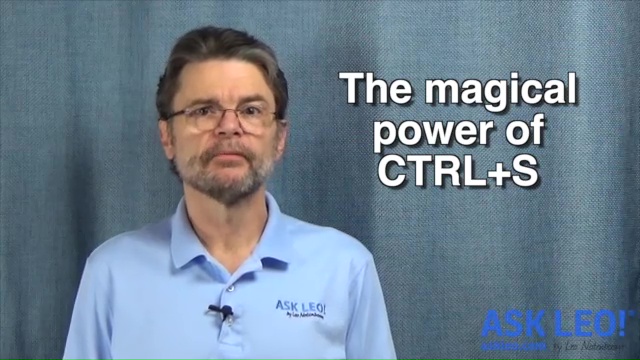 Can I stop or 'un-send' an email I sent by mistake?

There are a couple of exceptions (one of which isn't really an exception at all), but the answer you need to keep in mind and always remember is simply no.

I'll describe why that is and what those so-called "exceptions" are all about.

Continue Reading: Can I stop or 'un-send' an email I sent by mistake?
https://askleo.com/2149

Why is a website trying to open a file on my machine?

Recently I was on a web site, clicked on a link and it redirected me to a "file://" URL. The screen showed folders & clickable links to folders and files that aren't on my machine at all! The question I want to ask is: is this website trying to access my personal files on my computer? Does a "file://" url mean my files somehow became public?

Nope. It's something much more benign and banal.

The author made a mistake when creating that website.

It's an easy mistake to make, and somewhat common – particularly with less experienced website creators – so I'll run down what it is and how they (not you) should fix it.

Continue Reading: Why is a website trying to open a file on my machine?
https://askleo.com/19738

A backup is nothing more than an additional copy of data, ideally kept in a different location than the original.

If there's only one copy of something – say a photograph on a mobile phone – then it's not backed up. If that device were to fail or be lost, then the photograph would be lost forever as well.

Computers are excellent at making copies of digital data, and backups are one important use of that functionality.

More than anything the important concept is that there never be only a single copy of important data. That's not backed up.

See also: back up

Chomping at the bit for Windows 10

Probably the best reason for not upgrading from Win 7 to Win 10 is the hassle and cost. Like XP to Win 7. All drivers had to be replaced, printer, scanner, camera, etc. Other than MS Office, most other programs needed to be replaced with the Win 7 version. Quite costly if one is running many programs. There is a saying 'If it ain't broken, don't fix it!'

The thing with Windows Media Center is that two groups of people use it.

The first group who use it because they think it's pretty or intuitive or works well on a big screen or with a controller, have alternatives if WMC was ever taken away from them. Other programs can do the same or more, sometimes better, sometimes not.

The second group use it because it allows them to use cable cards and record live TV whenever they want. They're a niche group and Microsoft is cutting the support due to licensing costs, similarly to how they recently removed built in DVD playback (if I remember correctly)

To my knowledge there are few, if any, software packages out there that allows you to interface with your cable Card (I think it's to do with encryption, or Microsoft being a "trusted" company being allowed access by cable providers) and those people have Little choise but to continue using their current OS if they want to keep their home Theater systems functioning.

I think the reason Vista is not a part of the free offer, is because it's not "upgradable" in the same way 7 and 8 is.

Microsoft is pushing 10 onto the large demographic of hesitant 7 users, because they're a large group and the upgrade is easy to install for even novice users. Giving it a price of free for 1 year, they hope many will jump to 10 without second thought.

The Vista userbase is far more limited in size and Microsoft perhaps doesn't consider them worth the effort. Vista users will also need to do clean installs of 10. When I purchased my Laptop it came with Vista, but I immediately upgraded to 7 for the price of sending my physical upgrade media (5-6$). I upgraded to 8 for a favorable price of ~20$ shortly after it was released and am upgrading it to 10 over the course of august.

I'm hopeful Microsoft will issue some favorable upgrade offer to Vista users, maybe offering cheap physical media. After all, it's fully in their interest to get every person on Windows 10 as soon as possible.

The correct idiom is "champing at the bit", not "chomping".

Both are considered correct: http://grammarist.com/usage/champing-chomping-at-the-bit/