How do I make the Windows 10 offer icon go away?

You've decided what you want to do with Windows 10. Maybe you've "reserved" your copy; maybe you've simply decided to wait.

Either way, your decision is made.

Now, what about that pesky little icon?

There are several approaches to making it go away. I'll show you a generic approach you can use for any icon in the Windows Taskbar notification area.

Continue Reading: How do I make the Windows 10 offer icon go away?
https://askleo.com/19696

What happens when I die?

This is actually a question I heard on an episode of Security Now with Steve Gibson and "the other Leo", Leo Laporte, some years back. They speak frequently about tools and techniques to keep data secure, and the question was asked in that context: how to make sure that data is available to those we might leave behind on our death.

It struck a chord, because I regularly hear the other side of the scenario. I frequently hear from those left behind, frantically attempting to access important, sentimental, or highly critical data that a recently deceased friend or family member has locked up tightly.

Think about it: what happens to your encrypted data, online accounts, social media, online finances, pictures, or your digital-whatever, if for some reason you're not around, or able to access it?

It's not particularly pleasant to think about, but with all the security measures we put into place these days to keep bad people out, it's worth also having a plan for letting the good people in.

Continue Reading: What happens when I die?
https://askleo.com/19633

Are we having fun yet? 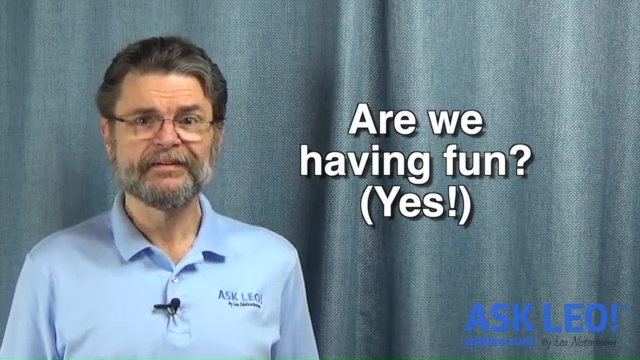 Continue Reading: Are we having fun yet?
https://askleo.com/19742

A hash is a mathematical formula that takes a collection of digital data, like a file or password, and calculates from it a number. A good hash algorithm has three important properties:

For example, a hash generated from a digital document can be used to verify that the digital document isn't later tampered with. If the document is modified in any way, the hash generated from the modified document will be different than the originally calculated hash. By comparing the hash of the original document with a hash of the current document, it's possible to say that the document has been altered or not. This is used as an important part of digital signatures.

Hashes are occasionally referred to as checksums or digests.

As an example of a hash, the MD5 hash of the word "password" is 5f4dcc3b5aa765d61d8327deb882cf99. Hashes are typically represented in hexadecimal. As a decimal number, that would be 39 digits long. You can see why we use hex.

How do I cancel my Windows 10 update?

I have read that win 7 8 home machines set for auto updates will have 10 installed automatically. Profesional and Pro will not. Can you comment?

Keep up the good information outlet. Love it.

I think that you're confusing two issues.

No one will have Windows 10 installed automatically. Period. You'll have to at least OK it, and possibly actively ask for it.

Once Windows 10 is installed: Home editions of Windows 10 will take Windows updates automatically. That's new. Pro and better will still allow you to defer updates to a time more convenient. That's as it's always been.

You say "no user accounts have been hacked, and no unencrypted user account information has been compromised", but that's not what LastPass said. They said "No encrypted user vault data was taken, however other data, including email addresses and password reminders, was compromised". The implication is that they found no evidence of loss of user data, since they do not say their systems properly monitor if something is taken or not. Nor do they say what "compromised" means.

One potential concern is they and possibly you have vested interests in playing things down. I note your account is less alarming than the one from LastPass. Can you say you have no interest in the matter; perhaps you should say that either way?

If the vaults were not 'compromised', why are they suggesting a change of master password? What do they mean, "to be on the safe side".

How could users have an unbiased account of the status of the security of their data?

Not sure what you're looking for from me. I have no vested interest in LastPass, and if you choose to move to a different system I certainly won't object. My comments stem from the fact that I believe that, while this is of course serious - any breech is - there's actually little impact on users of LastPass. By that I mean that you and I are not at any significantly additional risk than we were before the hack. My frustration is that the general technology press likes to make end-of-world headlines and thus overstate the impact (or at least imply that the impact is far greater than it actually is). As a result, people - people that visit Ask Leo! - panic and make ill-concieved decisions based on inaccurate information.

The hashes of user's master passwords were stolen. (https://glossary.askleo.com/hash/) That is NOT NOT NOT the same as actually having the password - which were NOT stolen because LastPass doesn't store your password - only the hashed value of the password. Having the hash does not allow the hackers to gain access to your LastPass account.

With one exception: if your master password was WEAK - as in, say, one of the top 1,000,000 most common passwords in general, then **in theory** the hackers could mount some kind of a brute force attempt to determine your passwords. This is still extremely unlikely, given the hashing algorithm that LastPass uses. But since the theory exists, it is easily thwarted by changing your master password. This completely invalidates the hash value the hackers have in their hands. So "to be safe" means doing that, and also making sure at the same time you choose a sufficiently lengthy/complex password when you do it.

But, like I said, if you don't feel convinced, then absolutely switch to another password manager. Find one you trust.