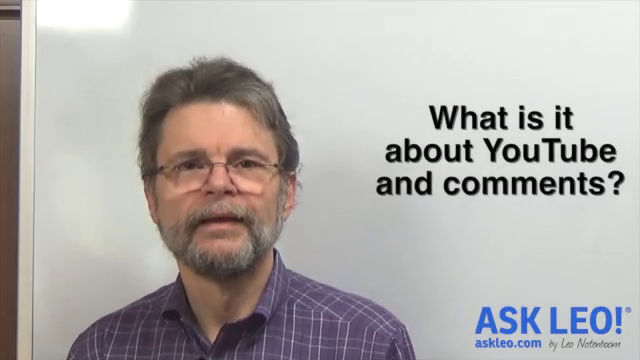 Continue Reading: What is it about YouTube and comments?
https://askleo.com/18737

How do I get Windows File Explorer to display details by default?

How do I get File Explorer to display details by default?

File Explorer (previously known as Windows Explorer in Windows versions prior to 8) defaults to show files as icons and to hiding some files from you.

That's not what I want.

Not only am I a control freak who wants to see all of the files and details by default, but even after all this time, there are actually real security issues associated with File Explorer's choice of default display.

There are several options you can manipulate, and it's fairly easy to make them the default.

Continue Reading: How do I get Windows File Explorer to display details by default?
https://askleo.com/4884

Are backup image files more fragile than just having copies of all the individual files?

I've been suffering from some minor disk corruption over the past couple of years. I ran every test I could think of. Eventually it turned out all four sticks of RAM, when used together, caused data corruption, but any two worked fine. I still can't figure that out, but anyway, it's replaced now and works fine.

However I now have some corrupt files, including some Macrium reflect disk images. Fortunately even if the backup is corrupt you can still browse it to get individual files out, but you can't restore the whole backup.

So my concern is that if you have one huge backup image (which for me could be 2TB+) or even one logical backup file split into say 1GB chunks it's relatively easily to corrupt that single file/backup set. If each file (or folder, or some subset) is backed up individually corruption is likely to take out a small subset of your backups, not the whole backup.

Interested to hear your thoughts on this, and if you know any programs that can do something along these lines.

Actually I have several thoughts, but I'll answer your last question first: no, I'm not aware of a backup program that works as you've outlined.

Your line of reasoning isn't at all new; I get comments similar to this relatively often. Nor is the concept limited to just backups, believe it or not.

There are reasons individual file backups can be useful. However, while I could be wrong, I don't think the solution you're proposing actually solves the problem you think it does.

Continue Reading: Are backup image files more fragile than just having copies of all the individual files?
https://askleo.com/18693

What is it about attachments?

This week, a report about the most common vectors for data breaches and related issues was released.

You and I are the weakest link.

For at least one large segment of malware attack, it's our propensity to download and open email attachments that gets us into trouble.

A couple of scary numbers from that report: 1 in 10 people will download and open an attachment attached to phishing email or spam. The average time between a phishing email being sent and the first victim taking the bait is 22 seconds.

What the heck is it about email attachments that makes them so darned irresistible?

Continue Reading: What is it about attachments?
https://askleo.com/18718

There are, of course, nuances to the term.

An image of a hard disk can take either of two forms:

The first is all that is needed for backup purposes. When restored, the files are replaced on the hard disk, but not necessarily in the same physical locations as they were originally. (One positive side effect is that often a restored hard disk has no fragmentation.)

The second, when restored, places all files in exactly the same physical location as the original and restores all unused sectors as well – thus enabling deleted-file data recovery and potentially other forensic techniques.

Finally, most backup programs create an image of a partition. To fully back up disks that contain multiple partitions, an image must be created of each.

Mac versus PC: It's Over

What are your thoughts on the Chromebook?

I would like to purchase the unit, but all my friends and I use Skype. There for I have to put off this purchase until

Skype is available on the Chromebook.

I may be purchasing a windows 10 when it becomes available only because it has Skype installed on it.

The Mac is just too expensive for me.

A good question which I hope Leo (or someone else) will answer or comment on as I am also interested in that computer. Chromebook appears very cost effective and ideal for a first user but I would assume that, like android machines, it is restrictive and focussed on Google's applications only. Skype, though, can be downloaded onto android tablets so I would have thought it would also work on Chromebook.

What is it about attachments?

Is clicking on a link in an email, which the recipient would do, less dangerous than opening an attachment?

Not really - with pretty much the same caveats: only click/open links/attachments that you KNOW to be safe. Not sure? Don't click/open. (The news report that caused me to write this talks about direct infection by attachment, but malicious links have their own similar set of issue.)