The Internet Is Forever, Except When It's Not

I was taught that it is impossible to delete, I mean totally delete, anything on the internet. The protocol of the computer or network simply buries it deeper in the systems and scrambles a random password to recall it. Find that scramble code and Presto! You can recall the deleted item(s).

Um…. no. There's no magical "scramble code" to recover anything.

But that does raise a very interesting conundrum. We often say "the internet is forever", while at the same time saying, "be sure to back up, because once you delete it, it's gone".

The ways of both the internet and deletion are more complex than most people realize. While these two statements appear to be diametrically opposed, they're both very, very true, often at exactly the wrong time.

As many people have discovered, one of the fastest ways to spread a rumor is to call it a secret. That's true in life, but nowhere is it more true than on the internet.

In 2003, she attempted to prevent photographs of her home from being published on the internet. This drew more attention, rather than less, to the images. It prompted people to copy and re-post the photos elsewhere, again and again and again. Indeed, the very Wikipedia article that describes "the Streisand effect" includes the picture she originally attempted to suppress. There's simply no way she, or anyone else, could find and delete all the copies of that photo that were made, and have continued to be made in the intervening years. Indeed, any attempt to do so would probably just spur another round of copying and re-posting.

We see this all the time with information posted publicly that is later removed or altered. Be it a tweet, a photo, a database, or something else, usually someone, somewhere, has made a copy of its original form. On discovering the attempts to rewrite or delete history, they're quick to call shenanigans on the effort by posting the original as proof. Depending on the perceived relevance of the information, the original may be re-posted once or many times in many places, making its removal from the public internet as impossible as removing the photo of Ms. Streisand's home.1

This is one reason we say "the internet is forever". Anything you post publicly can be copied. There's no easy way to know by who, or by how many, but you can never assume that the number of copies is zero. Never. Once it's on the public internet, you lose all control over it – whatever it might be – the instant that first someone makes a copy.

The public internet & you

OK, so you're not Babs2. To the best of your knowledge, no one cares about your tweets, photos, or whatever it is you care to post online. No one's making copies of what you post publicly.

While it's likely that you, as an individual, aren't that interesting, that doesn't mean that what you're posting online isn't being copied, and probably quite quickly. You're "interesting" in the sense that you're a user of Twitter, Google Photos, Flickr, or whatever public service you happen to use. Those sites are mirrored regularly. Why?

And that's before we even consider corporations, malicious agents, and governments copying public information for their records, analysis, and uses unknown.

Is something you've posted in there? Probably. Will it matter someday? There's no way to know. I personally publish a lot, but I don't expect it to be a problem.

I keep using the phrase "public internet" because it's an important distinction many people fail to keep in mind. Public is public, and as we've seen, public must be considered to be "forever".

So instead, we ratchet up our privacy settings, restricting who is allowed to access our stuff, or perhaps only emailing certain things to certain people. We keep it "private" – or so we think.

Yet we remain at the mercy of everyone with whom we choose to share our data. Each could be copying what you've given them access to, intentionally or otherwise. On top of that, they could have really bad security; should their accounts or computers be compromised, whatever they have could be in the hands of a hacker in moments.

While that last scenario is not very likely, (unless you're a "high value target" in the hacker's eyes, and he's used your friends to get access to you), it underscores something that is vital to understand: every time you share information with someone, you're giving them a copy, or you're giving them the ability to make a copy.

Backing up the internet

The internet isn't a "series of tubes" at all; it's nothing more than a collection of computers that store data and know how to talk to each other. When you use a service like Twitter, send email, upload a photo, or even post a comment on a web site like Ask Leo!, that information is stored on a computer not unlike your own3. Those services are all taking steps to back up the data they contain (hopefully like you are).

Backing up makes a copy of all the data – including all your data.

Even if you're the only one using an internet-hosted service – perhaps your email, cloud storage, online password vault, or who-knows-what – there's a good chance the service provider is regularly backing up their servers in case something goes wrong. In fact, we hope that's exactly what they do.

How long do they keep they backups? They're not saying. It could be moments or years. But it's possible that whatever you've shared online, or stored online for yourself, has been backed up somewhere, somehow, in some way. That's yet another copy of your data that's effectively impossible for you to erase – which brings us to the reason for all this "internet is forever" kind of talk.

You delete an email. You delete a file from your cloud storage. You delete a photo from your social media account. You delete a tweet. As you can see by now, regardless of exactly what that looks like to you, it's very likely you've deleted only one of many copies of your data.

Yet, you can't get it back. Once you delete it, it's gone.

The "catch" is that you've deleted the copy that's under your control. Perhaps it's the copy that's most obviously visible to everyone, but it's probably not the only copy.

Unless you have access to those other copies, or you've kept a copy on your own machine, you've lost your data. The online services generally will not restore from their backups (the backups are to recover from their issues, not yours). Hackers certainly aren't going to share with you, even if you can track them down (they're probably overseas anyway). And the NSA isn't going to respond to your request to restore your data from their backups (assuming they've been watching you, of course).

This is why we say "once you delete it, it's gone". There may be other copies, but there is likely no way to access them.

If it was public, maybe you'll get lucky and find a copy on The Internet Archive – I've recovered an occasional website or web page from there on occasion. If it was private, perhaps someone with whom you shared it still has a copy. If it was yours and yours alone, and it was stored in only one place, then you weren't backed up. It's likely gone forever, regardless of how many actual copies there might be.

Unless you have sufficient resources (read: money), a compelling reason, an attorney, and a court order to force an online service to retrieve it, whatever it is you deleted is gone.

And then it gets weird.

Deleted isn't deleted except when it is

Whatever you deleted is gone from your grasp. You deleted it, and you can't recover it. Unless you had a backup, of course.

But it's not really gone, now, is it? As frustrating as it is, copies continue to exist: system backups, at a minimum, and possibly archive/mirror copies, research copies, malicious copies, and more.

There are only two things you can count on, really:

The solutions are equally simple:

These are exciting times, to be sure, but they're complex and often frustrating times, as well.

Related Links & Comments: The Internet Is Forever, Except When It's Not
https://askleo.com/27274 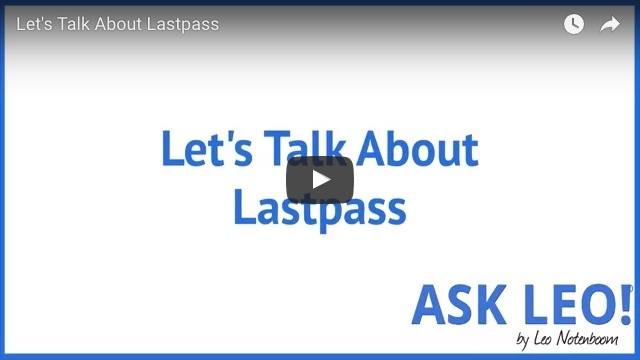 LastPass recently announced that vulnerabilities were discovered in the LastPass vault. The question is... did they then do the right thing?

I'm writing this on a $200 ASUS Chromebook. If that's not something you've heard of, I'll explain what it is in a moment. If you know what a Chromebook is, then you also understand why what I'm trying is significant.

I'm returning from a five-day business trip during which I decided to see whether I could accomplish everything I need to do using a Chromebook.

Why? Because Chromebooks can be less expensive – and, more importantly, safer – than the traditional Mac or Windows alternatives.

And because if I can, chances are you can, too.

As I sit in the Dallas / Fort Worth airport on the way home, it certainly looks like I can.

Opting In and Opting Out of Email

As I reviewed the amount of email I get – both in aggregate, looking at last year's email in a prior article (see the "That's a lot of email" sidebar in Email: Save Everything So You Can Delete More), and just in passing, as I deal with my day-to-day email – it occurred to me that a lot of the email I get is by choice, or by failing to make a choice when I had the chance.

Hence, I started making some different choices to reduce the amount of email I get.

In short, I asked the senders to stop.

I now do this periodically.

Continue Reading: Opting In and Opting Out of Email
https://askleo.com/27358