You Can't Un-Ring a Bell 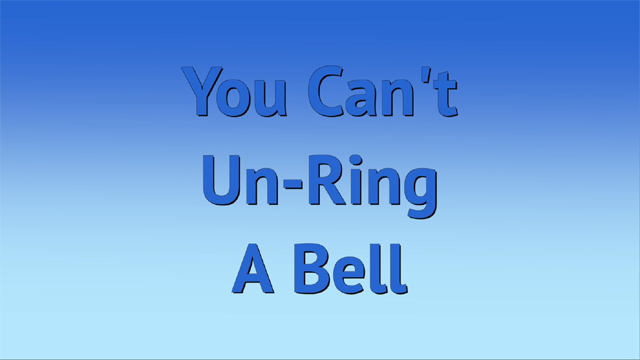 An overview of what happens to your data when you post online. Once posted, it gets copied faster than you may think!

How Do I Recover a Wi-Fi Password When I'm Not Connected?

In a previous article you showed how to get the Wi-Fi password being used to connect to a wireless network. The only catch is that you had to be connected to the network to get the password.

It's a long story, but … is there a way to get the Wi-Fi password for a network I was connected to at one time, but am not connected to right now?

Actually, yes there is.

Unless you explicitly tell it to forget, Windows will carefully remember all the passwords for all the wireless networks you've connected to in the past.1

The only "trick" is that we'll be using Command Prompt to get Windows to show us that password.

Continue Reading: How Do I Recover a Wi-Fi Password When I'm Not Connected?
https://askleo.com/24151

How Do I Disable Cortana?

There are registry hacks around that will actually disable Cortana. However, I don't think they're generally necessary for the average user who just wants Cortana hidden.

Instead, there are a few settings that will get 99% of the job done. It's just not obvious where they are.

Continue Reading: How Do I Disable Cortana?
https://askleo.com/24169

To spoof something is to falsify or otherwise fake information.

The most common use of the term of late is with respect to email. Specifically, the sender of an email – the information that appears in the "From:" line – is easily (and therefore frequently) falsified by spammers. This is known as "From: spoofing".

Spoofing is, of course, not limited to email, or email "From:" information. Various aspects of almost any information can be spoofed for various reasons and with varying degrees of success.

Turn Off Fast Startup in Windows 10

I was frequently getting BSOD when starting my HP desktop (Win 10 with "anniversary" update). The hard drive light would flicker briefly then stay off. I'd eventually hold down the power button to force shutdown, after which it booted up normally. Thought it was possibly a flaky boot sector. Tried CHKDSK but it did not help. Considered getting SpinRite but with drives so cheap I ordered a 1TB "gamer" HD...and made sure my full image backup stayed up to date! Before the HD arrived I read this article and unchecked Fast Startup. End of problem! Oh, well. Plan to go ahead and install the new HD anyway, as it has better specs than the factory drive, now 4 years old.

One of the Reasons I Think Backups Are SO Important

For a long time I couldn't understand what Leo meant by 'if it's only in one place, it's not backed up'. I thought it would be obvious. Turns out, it's not.

Yeah. That phrase came to me when I'd heard that "I moved it to my backup drive" one too many times. :-(

I left Hungary with my parents in December 1956 to save our lives from retaliation by the restored communist government. As we dragged ourselves across the Hungarian-Austrian border all we were able to take with us were some change of clothes and family photographs. Later in the USA these photos were in albums that we could view on the coffee table. Still they deteriorated in storage and mishandling. A few years ago I bought a scanner by Epson "Perfection V370 Photo". This machine is now ancient, but it still does an excellent job of scanning photographs, slides, and negatives in addition to documents. I began to scan the old photos, and later the 35 millimeter slides, and still later color photos. Using "FastStone" I was able to repair many of the old Daguerrotype and later black and white prints that were damaged by humidity and silverfish. Of the color slides, they also suffered over the years accumulating fingerprints, liquids splashed, dust, and lint. all of that I was able to repair once I had the photos digitized.

As for backup, the photos are not unique. I have all of my data in a Dropbox folder. As such, any changes I make are instantly backed up. I also do daily, weekly, an monthly system backup on external drives that stay off line until I use them. The daily is on an internal secondary drive, so it is automatic. I do not rely on preserving data on any portable device such as CD or DVD. As one said, if the device becomes passe, we have no way to read them. Digital data maintained on the hard drive is different. My photos are all JPG format, and videos for now are MP4. If the formats begin to pass for a better version, I will simply do the conversion and have the new ones saved.