One of the Reasons I Think Backups Are SO Important 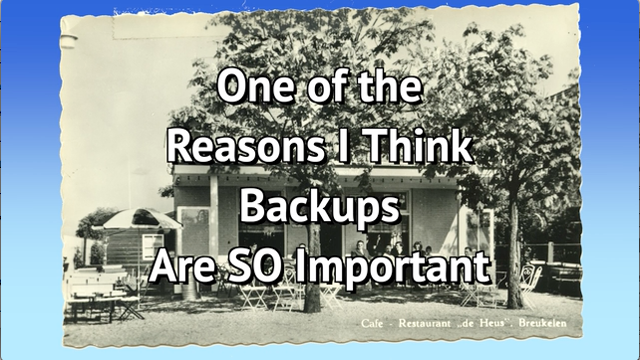 I have a good reason to always be talking about backups... Once upon a time everything was lost.

Continue Reading: One of the Reasons I Think Backups Are SO Important
https://askleo.com/24191

How Do I Move My OneDrive Folder?

When you set up OneDrive, it places the local machine copy of your files in a subfolder of your user folder. For example, on my machine, that would be:

Personally, I don't like that. I prefer to have cloud storage folders like OneDrive at the top, or "root", of my C: drive. Perhaps more practically, however, many people like to place these folders on another drive completely.

Continue Reading: How Do I Move My OneDrive Folder?
https://askleo.com/24099

This is actually for a school assignment for a class called Human Relations in Organizations. I have to ask someone with a career in my technology these three questions:

1.) What skills do you use every day to deal with others at work (co-workers and clients)?

2.) How often do you use those skills (a specific number, like a percentage of a typical day, or week)

3.) Do you think a class about human relations should be required for an Associates degree in computer programming? Why or why not?

Normally, I don't answer homework questions. You'd be surprised at how many I get that are obviously someone trying to get me to do their homework for them.

This one, besides appearing to be an honest question as part of an honest assignment, speaks to something I feel strongly about. It's not something I would have guessed when I started my career in computer programming.

Dealing with people is much more difficult than dealing with computers …

… and yet way more important.

I connected to my WPA-protected Wi-Fi network ages ago, and now I can't remember the password. How do I figure out what it is?

It's not at all uncommon to set up a wireless network securely, and then get on with your life, neglecting to write down the encryption password you created. Later, when it comes time to add another device, you're unable to remember that all-important password.

It's so secure, even you can't get in!

There are two approaches you can take.

A backup is nothing more than an additional copy of data, ideally kept in a different location than the original.

If there's only one copy of something – say a photograph on a mobile phone – then it's not backed up. If that device were to fail or be lost, then the photograph would be lost forever as well.

Computers are excellent at making copies of digital data, and backups are one important use of that functionality.

More than anything, the important concept is that there never be only a single copy of important data. That's not backed up.

See also: back up

Leo, if you really are intending to keep using your Samsung Galaxy Note 7, I hope you're on Verizon.

The Register published this article today:

I mentioned elsewhere, but my Note 7 has been returned. I was waiting for something equivalent, and the Google Pixel XL fit the bill. :-)

"Do you have a good source of finding out if a password is a secure password where a hack will be almost impossible?" - This:

Password length/complexity is actually not as important as many people think. Passwords mainly get compromised in one of three ways. Database theft and phishing are by far the most common, and the complexity of the password does nothing to help in such scenarios (a complex password can be stolen or phished as easily as a simple password). The third way is for it to be guessed or otherwise discovered by a dishonest friend/family member/co-worker. In this scenario, complexity does help, but a password does not need to be enormously complex to defeat the attacker.

Password checkers, such as the one I linked to above, assume that somebody will be running cracking tools against your password. In the real world, however, that simply does not happen (unless, that is, you're specifically targeted because your laptop is loaded with trade secrets worth millions).

To be clear, I'm not suggesting that strong, long passwords shouldn't be used - it's easy to do, so you may as well do it - simply that it's not necessarily as important as people think.

Actually there is an argument for complexity - or at least length - in the case of database theft: brute-force (or rainbow tables) in conjunction with poor password database design. The shorter/simpler your password is the more likely it is to be able for a hacker to try all possible passwords against a stolen database. At a minimum it's trivial for them to try huge databases of known or common passwords. As I said, good database design can make this significantly more difficult - but the opposite, poor database design, can also make it next to trivial for the hackers. And, sadly, we keep hearing about compromises where it turns out the stolen database was implemented poorly.

This is one of the reasons I've started promoting length over complexity. A short 8 character password can now be compromised no matter how complex it is. The odds of a longer (say 16 character) password being compromised in that manner are significantly smaller.

The societal implications of mass surveillance are enormous. In fact, it could very well turn out to be the biggest issue of our time.