Two things before the newsletter itself today:

Saved! Backing Up With EaseUS Todo is now available on Kindle and in paperback, both via Amazon. If you've been waiting for either of those, I wanted to let you know.

Saved! Backing Up With EaseUS Todo for more information.

AskAny.com is a new site by my friend Gary Rosenzweig of MacMost. If you're familiar with Reddit's "AMA", "Ask Me Anything", in a way it's a 24 hour AMA for anyone to both ask, and answer questions. Ever fancy yourself a question answerer but not interested in setting up your own site or corner of the web? Visit AskAny.com, tell the world who you are, and get ready to answer questions about it.

Or, if you just have questions ... visit AskAny.com to see who's out there. Sure, there's a guy who answers tech questions (and another), but there's also a guy who loves Corgis (wonder who that could be

), a TV and film actor, a travel enthusiast, and many, many more. In fact, as more people visit and set up their own area of expertise you'll find that list growing at a pretty good clip.

Asking and answering questions ... what a great idea!

You Can use Free Email Safely (but most people don't) 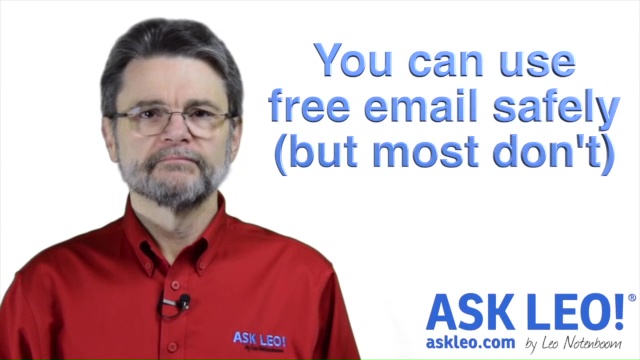 Continue Reading: You Can use Free Email Safely (but most people don't)
https://askleo.com/20943

How do I set a custom icon for a desktop URL shortcut?

I recently purchased a new PC. I would like to make a custom icon to Google that shows the Google square as red, white, and green, as opposed to the IE world. It's the same with files; it shows just an open manilla folder on the desktop, which I would like to change. Any info on this would be appreciated.

It's not that difficult to provide a custom icon for a shortcut at all. In fact, there are a couple of approaches.

I'll show you both.

Continue Reading: How do I set a custom icon for a desktop URL shortcut?
https://askleo.com/4972

How can I tell if my computer can run Windows 10?

Can my computer run Windows 10?

That's actually a very good question. It'd be great to know if your computer can run Windows 10 before installing, right?

What's frustrating is that even when the answer appears to be "yes", it may still be "no" – which means at best, all I can say is … "maybe".

Microsoft provides criteria to determine whether or not your computer can run Windows 10. The problem is that several months after its release, it's clear that that those criteria aren't enough. Even after supposedly meeting the requirements for Windows 10, some upgraded machines still run into trouble.

I'll review the issues I've heard about, and make some recommendations as to what you should do.

Continue Reading: How can I tell if my computer can run Windows 10?
https://askleo.com/20851

VSS is an acronym for Volume Snapshot Service. Also known by other names, including Shadow Copy, VSS is a service in Microsoft Windows designed to allow backup software to take backups copies of files even though they may be in use and otherwise locked.

Traditionally a file that is being used by a running program can be locked so that other programs cannot access the file at the same time. This most often applies to files that could be written to, since having the file change could cause other programs to get confused were they allowed to simultaneously attempt to access it.

Unfortunately, this type of locking would prevent a traditional backup program from being able to back up the file.

To grossly oversimplify, VSS creates a snapshot of the file(s) in question at a point in time – a "shadow copy" – that can be safely backed up, even though the original file might continue to be locked, written to, or otherwise modified.

How to create a backup image using Macrium Reflect Free

Leo has done a brief video series on how to back up and restore using the EaseUS Todo Free backup. You can sign up here to view them:

One flaw with Macrium Reflect, and I believe some other backup programs, is that if there is a bad sector on the OS drive, the backup stops and gives you an error without telling you what to do. I had that same problem. In my case, I found that I hadn't backed up for about 20 days. I ran chkdsk /r on my OS drive and it fixed the bad sector and that solved the problem. Since I use the paid version of Reflect, I have it send me a message on the success or failure of the backup. If you are using the free version, you should regularly check to see if the backups are being created.

Leo has suggested to back the hdd . Could the rescue disk be done on the same hard drive ?

Would not pen drive support the back up with rescue disk? These are natural questions before i attempt to take back up.

One more question? Would the rescue disk ask for device drivers as in window install?

Can one copy the device drivers for the system from user computer? Please

Leo generally recommends a minimum of 3 times the used space on your system drive. Considering the price of drives, a 1TB or greater (more is always better) drive is not a bad idea to allow for more data and keeping a few generations of backups.

The backup should be done to an external HDD which works essentially the same as a pen drive. Plug it in, and your computer assigns a drive letter, and you're ready to back up.

The rescue disk should be either a CD or a bootable USB pen drive.