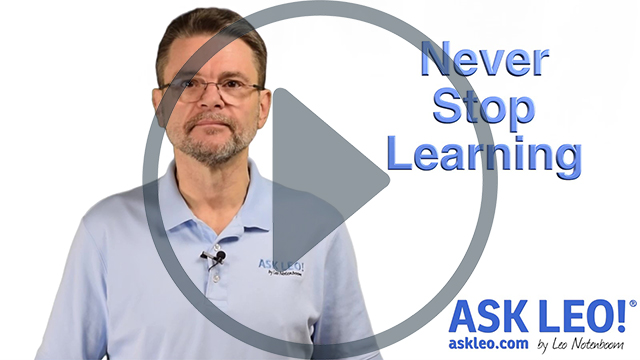 I haven't seen you mention Firefox problems. I've been using it for internet but it goes into "not responding" mode, particularly when you click on a link in a news email.

The problem, though, is that it's never as simple as telling you "well, here's what you do to stop ‘not responding' problems". There are so many possible causes, there's no way to know which one might apply in your situation.

What I use instead is a more general approach to dealing with internet web browser problems that applies to all popular browsers – not only FireFox, but Chrome, Internet Explorer, and more.

Can a MAC address be traced?

I know that all computers have a unique MAC address. But how traceable are they? If my laptop gets stolen, and I know my MAC address, can I get back to it if the person stole it gets connected to internet, even after formatting the machine and thinking that it's safe to connect? Seems like this could stop laptop burglaries if that MAC address thing is traceable.

You're correct … it could put a big dent in laptop burglaries if MAC addresses were truly traceable. It would at least increase the odds of stolen equipment being recovered.

But they're not traceable… at least not in any way that could help.

Let's look at why.

Continue Reading: Can a MAC address be traced?
https://askleo.com/20452

A motherboard is the primary circuit board in a computer. It typically has sockets for the machine's CPU, RAM, keyboard, mouse and disk controllers, and the circuitry to interconnect them all. It's also common for motherboards to now also contain additional circuitry for external connection's such as USB and eSATA. Many motherboards also include video adapter circuitry as well.

Many motherboards, particularly those in desktop PCs, include slots into which expansion cards can be inserted to provide additional hardware functionality. Occasionally those expansion cards, or other cards that can be attached, to a motherboard may be referred to as daughterboards.

I noticed that you are focused on security when discussing password managers. OK, that is their primary function.

However, any password remembering software is useful for folks (like my 93-year-old mother-in-law) who have trouble remembering things. Security is not really an issue for her. She has nothing of import on her computer. Anyone who hacked in could only see some really cute cat videos. But, the passwords enable her be online.

"Security is not really an issue for her. She has nothing of import on her computer." - There's no way I could agree with that. Security is an issue for ANYONE online. Most people think they have nothing important ... until something happens, and they realize they were wrong. Even if there were nothing important, how would she feel if her accounts were hacked and someone began impersonating her to her contacts?

It's a sad reality, but everyone needs to take security seriously.

"There's no way I could agree with that. Security is an issue for ANYONE online." - I agree 100%. I've never encountered a computer - and I've worked with them for more years than you can shake a stick at - that didn't contain personal/account information that could potentially be misused if someone were to gain access to it.

Your technical videos and articles on computer related technical matters are some of the most clear, concise and helpful that I have heard and read, and I constantly refer my friends and colleagues to them. However, over the last several months, you seem to have drifted away from your "core business" into what could be best described as "lifestyle" articles.

With the greatest respect, I would like to humbly suggest you go back to doing "what you do best".

It's a delicate balance - right now I'm finding that these "lifestyle" issues are impacting more people in more ways than specific technical issues, so I'm electing to spend a little time on them. Not to worry, core how-to information won't go away.