It was reported this weekend that a serious security vulnerability had been discovered in TrueCrypt. Not a fault in its encryption, but rather a more traditional vulnerability that malicious software could use to gain administrative privileges on your Windows machine.

My tentative understanding is that VeraCrypt it a free, compatible, and supported alternative, based on a fork of the original TrueCrypt code. And yes, these most recent vulnerabilities are supposedly fixed therein.

Even though TrueCrypt development has halted, I've continued to recommend its use ... until now.

I'll be placing this same warning on both of the TrueCrypt articles, and will be updating those articles with my recommendation as soon as I've come to a conclusion.

In the mean time I wanted to get this information to you right away.

You're never too old! 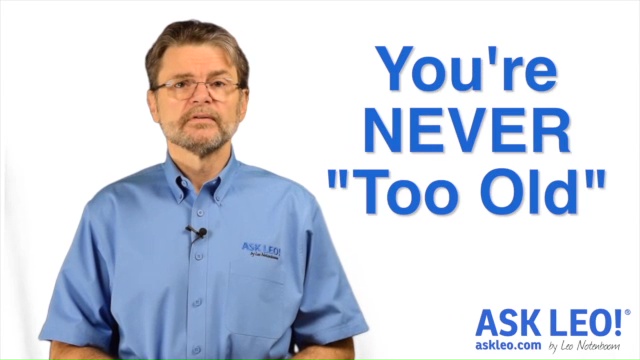 Should I worry if email I send is marked as spam?

A business I was working with told me that they ‘sent my email address to spam' because they didn't like what I was asking of them. Now I'm a smidge worried. If they added my email address to their spam filter, does that mean I'm somehow going to be pegged as a spammer in the larger Internet world? I seem to recall that someone once told me that anytime someone clicks that a message is spam, it's a strike against you. Enough strikes and we're in trouble. I don't remember how many strikes he said it took to be in trouble, though.

So…am I worrying about nothing? Or should I do something about it, if there's anything to do, that is?

The answer is simple: do nothing.

The reason behind the answer, naturally, is quite complex.

Spam filters – particularly good spam filters – rely heavily on users marking things as spam. In a way, it's a form of "crowd sourcing", where the actions of users build a database used to determine what is and is not spam in subsequently received emails.

Where your email is marked as spam, and who is doing the marking, has a lot to do with any potential impact on emails you send in the future.

Continue Reading: Should I worry if email I send is marked as spam?
https://askleo.com/20280

Where do I get driver updates?

I downloaded 3 separate ‘check drivers' programs. Each program identified seven drivers as being outdated. However, my Device Manager says they're OK. It's been very difficult to find the drivers, and if they are outdated I will have to purchase one of the driver programs. Do I need to update these drivers? If so, how do I find the sites to download?

First of all, Device Manager will not tell you whether or not a device driver is out of date – that's not its job. What it tells you is if the device driver is installed and working at some basic level.

Finding out whether your device drivers are out of date isn't that simple – and neither is getting the updates.

I'll review the options, and describe what I do.

Continue Reading: Where do I get driver updates?
https://askleo.com/4487

Several weeks ago I asked you to complete a brief survey. The primary question was:

As always, I was overwhelmed by your response. Thank you for participating.

I want to share with you some of what I learned.

A driver, short for "device driver", is software that's installed into Windows (or any operating system) that handles the operating details for using a particular hardware device.

Many drivers are included with Windows by default and these can be overwritten by drivers that you install or download from device manufacturers. This allows Windows to take advantage of more of the hardware capabilities of the specific devices. For example, Windows includes a fairly generic mouse driver, but downloading updated drivers from the mouse manufacturer may enable additional buttons and capabilities that the default drivers ignore.

Drivers can be simple or complex, and like any software, drivers can have bugs. Quite often the advice when diagnosing suspected hardware related issues is to download the latest drivers directly from the hardware manufacturer in the hopes that bugs present in earlier versions, including the default drivers included with Windows, have been fixed.

Four of the upgrades went fairly smoothly with only one laptop having a display driver issue which - for me anyway - was easily sorted.

Most of the upgrades were from Windows 7 Pro which had just the display issue mentioned earlier. It was of interest to note that a Windows Old directory appeared and the offer made to go back to the previous version of windows if I wanted to. The offer would expire in 30 days after upgrade. I haven't used it to find out how well it works as I'm enjoying Windows 10.

One laptop, running Windows 8.1 Pro got 97% of the update done and then, for reasons still unknown, wouldn't continue and reverted back to Windows 8.1 Pro. I've tried two more times to upgrade and the same thing happens every time. It intrigues me and one day I'll get back to seeing what the problem is.

I've been impressed that equipment at least 10 years old - a Toshiba laptop - has upgraded with little problem and operates faster than its original operating system Windows XP Pro or the Windows 7 Ultimate it was running at the time of the upgrade. (I generally don't keep equipment that long but this laptop has never failed me and its display is still very good.)

Privacy is not a big issue for me. I do note that advertising on webpages is now more concentrated on the pages I generally visit regularly. More pronounced now than when I was on Windows 7 or Windows 8.1; maybe I'm noticing it now as privacy is being mentioned a whole lot.

My opinion of Windows 10 is positive and I recommend it as a more polished operating system than Windows 8.1.

I wish that I had taken your advice and waited another two months before installing 10. I have 3 computers, my main computer is now on 10 and throwing problems. including malware, which it never had on Windows 7. I also know others who never publish anywhere but are having issues. I notice form the comments that some people with older machines have converted to Linux. As a result I have now changed my old Vista computer to Linux Mint and it is working far better than it ever did on Vista. In fact, it is running better than the machines on Windows. What do you think of the idea of recommending that people with Vista and XP do a clean install of Linux?

Leo has talked about Linux as a possible replacement for Windows. It may work for some, but it's not for everyone.

Should I convert to Linux?

I have an old machine. Can I install Ubuntu Linux on my Windows XP OS?

According to their blog, they only use that information to give you a better experience. Now doesn't that give you a warm fuzzy feeling?