Request from a Colleague

Lauren Weinstein, a long time industry professional and the moderator of the PFIR - People For Internet Responsibility - mailing list, sent out a request recently that I thought might appeal to some of you.

One of the topics I deal with regularly are the ways in which technology is causing issues for those who consider themselves 'older'. If that's you or someone you know, Lauren's looking for your stories.

Lauren's a good guy, very thoughtful, insightful, and practical when it comes to technology issues. I trust that these stories will be put to good use.

He asks that if you do choose to share a story, you do so via the email address listed in his post.

Change for the Sake of Change? 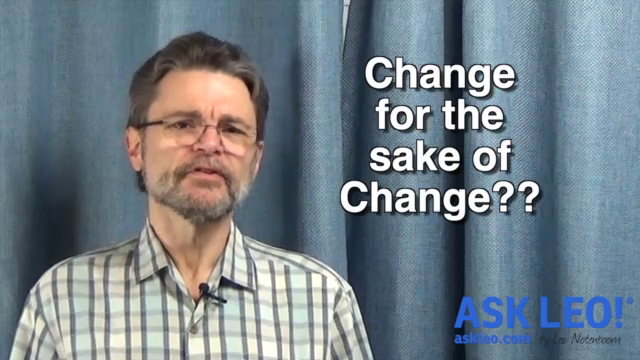 Continue Reading: Change for the Sake of Change?
https://askleo.com/19522

What does "No Signal" mean?

I just started to get a "No Signal" message when trying to start up. When I push the Panic button on the tower, it starts. Everything works normally after the start. What's going on?

This message, and several others like it, confuse many people.

The reason for the confusion is that the message isn't actually coming from your computer at all.

Continue Reading: What does "No Signal" mean?
https://askleo.com/4824

My computer's IP address was 192.168.x.xx, and somehow it was changed to something beginning with 169.254. Because of this I can't access the internet. Any ideas?

Your computer's IP address wasn't "changed" so much as it was broken.

If your computer ends up with an IP address beginning with 169.254, then something is definitely wrong.

Is this "Get Windows 10" icon legitimate?

Just noticed the icon prompting me to reserve my free upgrade to Windows 10 (currently running Windows 7 Pro SP1). Is it legit? If so, would you recommend jumping right on this, or waiting a few months while others get the bugs out?

Whether you do it is up to you, but it's not going to get you what you think.

And somewhere, I swear, there's a marketing "professional" that needs a good talking to.

Continue Reading: Is this "Get Windows 10" icon legitimate?
https://askleo.com/19559

An IP address, short for Internet Protocol Address, is a number used to identify a device connected to a TCP/IP network like the internet.

Every device connected to a TCP/IP network is required to have a unique IP address. It's important to realize that an IP address is assigned to a device, and that device then in turn may be capable of hosting many different and potentially unrelated services including websites.

A router, as a device connected to the internet, is assigned an IP address on the internet, but it also establishes a completely separate network or LAN on which attached devices are assigned IP addresses that are unique to only that local network. The router, then, handles Network Address Translation or NAT to give the local devices the ability to contact services on the internet where they appear as connections from the router's internet IP address.

I see most of your reply comments are from current Geeks who have realized exactly the problem you describe and have modified there teaching or explaining of tech speak so that "us" common none geek can hopefully grasp a little understanding. I joined the computer world only about 3 years ago when I was in my late sixties. I think I am a relatively smart person and the computer was an awesome tool to open the world. I tried to learn all I could at a rudementary level never having any experience in this field. I went to school earning a degree with a triple major in Econ, Polysci, and Business Admin., and then went on to lawschool. This all prior to computers being anywhere near mainstream. I bought a smartphone a year after a computer. I was so ignorant I had to go back to the computer store to have the geek at the counter show me where to turn on my laptop. No one helped me learn. I went to ROP classes and the teachers were very unhelpful. They would try and show how to use wordperfect or business stuff and not even explain the basics of the computer. If we goofed up something in our lessen we would raise our hand and they would come over - reach over our shoulder touch a couple keys (not explaining what keys or how they worked) and walk away. It was so frustrating I wanted to strangle them. How would this help us at home or away from the class. I went to 3 different "Computers for beginners" classes and all of them were very similar. I finally found a "Computers for Dummies" library book that went step by step. "Push this button and this happens, This key does this - It taught Windows Vista and my computer was Windows 7 but it was a much better help than any or all 3 of the Geek computer teachers I encountered in computer school. The computer I bought came with instructions but of course they were in the computer. Great help. You have to know how to use a computer to get to the instructions for how to use the computer. My smart phone was just as instructional. AT&T was just as helpful. They took my money and handed me the phone. They set it up for me, handed it to me and here I have a phone (Samsung Note 1) 50 time smarter the the computer they used to go to the moon. Not one single word of instruction, except again inside the phone. All Geek related TV adds and related electronics is also just a vague. No one explains what anything does, they assume the consumer knows or he wouldn't be buying it. Home depot has classed on how to paint, lay tile, pour cement and yet Best Buy or Fry's or Office depot offers even basic instructions of Technology. We want to learn and take part in the technology revolution, but we need to learn 1&1= 2 and 2+3= 5 before we can take on advanced calculus. I could go on for days as this is a pet peeve but I believe many out there know exactly what I am talking about.

As an old geek (86) who has been rescuing fellow ancient computer mariners whose "ships" ran on the rocks, I agree with your commentator who found that no matter how intelligent folks are, they may not be wired to deal with the weirdness of a machine which understands only 0 and 1.

But, on a different level, I think computer problems teach religion. They have taught me lessons in patience and humility that were never absorbed in Church.

Thanks for your wonderful and informative newsletters and videos.

Actually the solution is quite simple. It's twofold:

1. Don't jump as soon as they have a problem. Do the repair on YOUR schedule, not theirs. If they have to wait a couple of days to get it fixed they will be a little more careful. The inconvenience should be mostly theirs, not yours. When my father-in-law pooches his laptop I just take it home and give it back to him two days later even if the fix takes only 30 minutes.

2. Disk imaging. I've made it very clear to family/friends that any computer I maintain must be configured to my specs. That means a C partition with only OS and apps. All personal folders (My Documents, etc) are located on D. I'll spend 30 minutes max trying to fix a system. After that the image goes back on and if the user saved any files on C then that's just too bad.

There's an interesting phenomenon. When safety devices are used, people tend to get more reckless. In one study, motorists drove an average of 3.35 inches closer to a test bike when the rider wore a helmet. Another study showed that a person in an ABS vehicle actually has a 45 percent greater chance of dying in a single-vehicle crash than someone without ABS. Unskilled drivers apparently drive more aggressively thanks to their false sense of security. If your users know that you are there to pick up the pieces in short time then they will likely take more risks with their computers.