As I mentioned here last week, I launched a new project. Here's the official "about" information:

Ask Leo! on Business is dedicated to the premise that anyone doing business, anyone with a cause to champion, or anyone with a message to share, needs to have a presence on the web.

And while it's easy to do it wrong, it also doesn't have to be hard to do it right. With a little guidance just about anyone can.

Roughly each week Ask Leo! on Business provides information on:

All in the clear, plain English that Ask Leo!'s Leo Notenboom has become known for.

You can visit the site, or subscribe to full-text email, audio, or RSS & podcast updates there - currently publishing each Thursday morning.

What Your Email Address Says About You 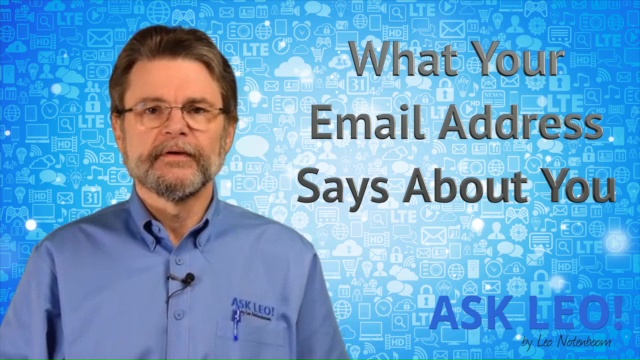 Continue Reading: What Your Email Address Says About You
https://askleo.com/21102

What about Windows 10 backup?

Windows 10 backup appears to offer two options: ‘File History' and ‘Backup and Restore (Windows 7)'. Since upgrading to Windows 10, I have continued to back up using the ‘Backup and Restore (Windows 7)' option, mainly because I have set up it up to take a system image as well as copy user files, and it doesn't look as though that is offered with the ‘File History' option. However the reference to Windows 7 bothers me – am I really backing up in an appropriate way for a Windows 10 system? I would appreciate your advice on this.

As I wrote in my initial reactions to Windows 10 backup, its options disappoint me.

In fact, built-in Windows backup continues a history of disappointment. Like Windows 7 and 8 before it, Windows 10 backup is at best only "acceptable", meaning it has enough functionality to be better than nothing at all. Sadly, even that represents an improvement over previous versions of Windows.

And, no, I don't consider "better than nothing" to be a ringing endorsement.

How long should I keep backups?

In your books you suggest that we keep backups for 2 months, as an example. I feel very comfortable keeping no more than 3 days. Is there any drawback in using such a short time, or is it OK?

Ultimately, this is an unanswerable question in a general sense. By that, I mean three days might be enough… or it might not.

It actually depends on a number of factors that range from your comfort level to your risk tolerance, as well as your personal back-up scheme.

To understand how long you might want to keep backups, we'll want to look at those risks.

Continue Reading: How long should I keep backups?
https://askleo.com/20977

Many people are annoyed with Microsoft's aggressive promotion of Windows 10. Not only is the "update now" utility being installed as an "important" update, all signs are that things are going to get worse. Microsoft appears to be downloading Windows 10 on the assumption that you want it.

The fact that it's a good operating system is being lost in the negative reaction to confiscating people's ability to choose.

GWX Control Panel can block Windows 10 and give the choice back to you.

A blog, short for weblog or web-log, is an online publication format. The blog author publishes articles – often referred to as "posts" – on a regular schedule.

Blogs, and the accompanying blog-publishing tools and software, span a wide range of topics and uses, from personal diaries to corporate publications, information and resource sites, and more. This glossary and Ask Leo! itself are published using blogging software.

In its most common form, a blog is simply characterized by a single website (or area of a website) containing a series of articles presented most recent first.

"Hiding the SSID is a simple added layer." As Microsoft's Steve Riley once said, "This is a myth that needs to be forcibly dragged out behind the woodshed, strangled until it wheezes its last labored breath, then shot several times for good measure." Disabling the SSID does absolutely nothing to increase security; on the contrary, it decreases it. Some reading: http://blogs.technet.com/b/steriley/archive/2007/10/16/myth-vs-reality-wireless-ssids.aspx. The post is almost a decade old, but as applicable now as it was then. See too the article linked to near the end of the post entitled, "Why Non-broadcast Networks are not a Security Feature."

Or run the "GWX Control Panel" from the Ultimate Outsider. It's very popular so rather than including the link here, just Google it!

In short, the GWX Control Panel turns off the nags, stops the Win10 downloads, optionally deletes what already has been downloaded and even optionally will monitor the flags to make sure Microsoft doesn't reset them without your knowledge.

I did exactly that. Researched it, ran it, and liked it enough to post an article about it: Block Windows 10 With GWX Control Panel (and on top of that I donated to the author as well).

"As I see it, everything being suggested in the comments comes down to how much risk you are willing to accept." Yup, it's all about understanding and balancing the risks. - and to do that, you need to understand that the security mechanisms you put in place to mitigate those risks can themselves introduce a whole new set of risks. For example, having a locked door will help keep a burglar out, but it may also keep you out if you lose your key. Adding a second lock will make your house more secure, but you've then got more keys to manage and an increased risk of losing one. And, of course, the more locks you have, the more time it takes to open your door - and the greater the risk that one of them will break and refuse to open. The same applies to computer security. For example, encrypting your data will prevent other people from accessing it, but it'll also keep you from accessing it if you forget your password (as an aside, I've encountered far more people who've permanently lost access to their encrypted data because of a forgotten password than I have people who've had their data compromised because it wasn't encrypted).

On Horses, Water, and Web Sites

I frequently get asked about creating web sites and online presences. I have experience, and no shortage of opinions. It's time to share...