Sorry for the moderately bad language, but networking has a problem.

Also this week: mice and keyboards that don't work, and that all-too-familiar scenario of hoping and praying that you can undelete a file.

I apologize for the slightly coarse language, but sometimes only the right word will do.

Computer networking is way, way, way harder than it should be, and much harder than it could be. Quite honestly, it's still too frequently beyond the abilities of the average computer user.

The state of networking

This is an update to an editorial — OK, a rant — I first posted nearly 13 years ago.

In the intervening years, not much has improved.

Connecting Windows computers together over a local network remains incredibly difficult for the average user. Making a connection that is both secure and flexible — two concepts inherently at odds with each other — is a common stumbling block.

Heck, making a connection that works at all can be a problem.

There's no getting around the fact that networking is very complex. But complex tasks are what we look to computers and technology to simplify for us.

And it's letting us down.

Almost everything impacts networking. Operating system versions, or even variations between flavors (like Windows Home and Pro) can make a difference. Setting consistent Workgroup names or log-in credentials can make things easier or harder. Occasionally there are obscure Windows settings you may or may not have direct access to alter.

Then there's the hardware: a wide variety of inconsistently-named devices called “access points”, “routers”, and “modems”, that — regardless of name — can act as modems, routers, and access points … or not. Add in cabling, wireless protocols, and more, and you've got a recipe for confusion that can stymie even the most patient user.

Problems are, of course, multiplied dramatically should you want to devices using different platforms to interact. A Mac and a PC? Perhaps. Macs, PCs, and Linux machines? There are still connections I've yet to figure out how to make consistently across all my machines.

With the advent of additional networked devices, including gaming consoles as well as mobile devices and tablets, life continues to get more complex.

I still don't know why devices like my DirectTV receivers appear (twice each), why my Roku and ChromeCast devices appear, or what the device labeled “Basement” is at all! Not to mention that I have many more computers than the three that show up.

Homegroup was a start

I'll be honest, I never liked Homegroup. It was never enough, and it made too many assumptions. That being said, it was a solution that worked for many people.

So, while I didn't like it, I'm frustrated that Microsoft elected to remove the feature from future versions of Windows.

I would have preferred continued investment in Homegroup, or something built on it, that would make networking incrementally easier for more people in more situations.

Instead, we're back to old, confusing, obscure networking tools.

There has been some improvement

I don't want to be all doom-and-gloom. It's important to recognize improvements have been made over the last decade.

Wireless networking, for example, was once exceptionally difficult, with little standardization, and operating system support that could be characterized as “bolted on” at best. Today it's natively supported, and for the most part, is something we typically assume will work, at least for direct internet access.

Similarly, I've been particularly impressed with recent machine setups where networked printers magically appear as immediately available or as easily installed. That's a level of simplicity — or at least lack of undue confusion — that works well for what, under the hood, is amazingly complex.1

Why do I — a normally positive person who's amazed with technology and all the opportunities it can bring — turn so gloomy when it comes to networking? Why am I going on about how bad things are?

I want you to know you're not alone.

Networking is hard. It's complicated. It's fragile. It's frustrating.

When it works, it's powerful, magical, and can be exceptionally enabling.

But for the most part, getting to that point sucks.

And I want you to know that as you bang your head against some networking wall, it's not you. It's not your fault. You're not missing something obvious. It really is that bad.

And it shouldn't be.

Maybe someday it'll get better, but I'm not seeing any relief on the horizon. 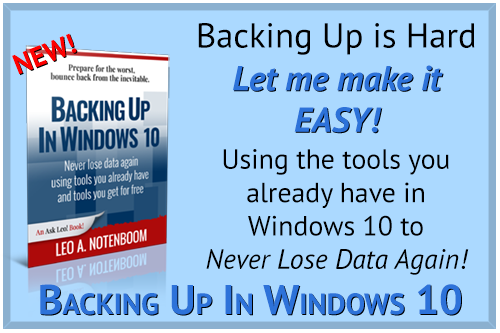 My Mouse and Keyboard Stopped Working, but Work Elsewhere. How Do I Fix Them?

I have an older Dell that has been upgraded to Windows 10.

The other night I ran a maintenance tool and turned the computer off  and on. When it came back on, the keyboard and mouse were not working. They connect by USB ports. When unplugged and replugged the computer acknowledges they are there. But I am unable to use the cursor or get any response from the keyboard in order to correct any problem.

The mouse works fine when connected to a different computer.

In your infinite wisdom…would you possibly have any ideas for me?

I have a guess as to what happened, and a couple of ideas on what I might do next, were I in your shoes.

Continue Reading: My Mouse and Keyboard Stopped Working, but Work Elsewhere. How Do I Fix Them?
https://askleo.com/39732

I Deleted a File by Mistake, Can I Get It Back?

I got carried away and mistakenly hit “Yes” when I was prompted about deleting a file — except it was the wrong file! Can I get it back? If so, how?

I think anyone who has used computers for any length of time has been where you are now. I know I have, and on more than one occasion.

The answer to your question is “maybe”. It depends on a lot of things.

Continue Reading: I Deleted a File by Mistake, Can I Get It Back?
https://askleo.com/2540