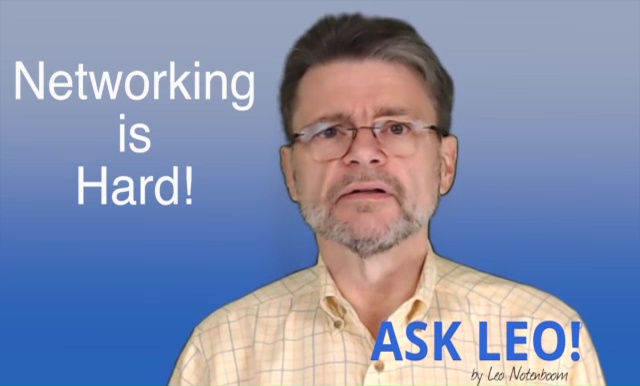 A friend asked about transferring files from a Mac to a PC. Sadly the "correct" solution didn't even enter my mind. Why? Networking is just too fragile, particularly between platforms.

Online Shopping - Just How Safe Is It?


As you might expect, I get many questions from computer users concerned about their security. With regular news of identity theft, credit card fraud, and database hacking, many people are understandably concerned about the security of their own information online, particularly when it comes to online shopping …

… so much so, that some actively avoid online shopping for fear of having their payment information stolen.

In my opinion, they should be more concerned about the security of their information off-line.

Continue Reading: Online Shopping - Just How Safe Is It?
https://askleo.com/2475

What's the Difference Between "Image" and "Clone"?

I always seem to become confused when the discussion turns to image and clone. I thought I understand the basic difference, but … maybe not?

One reason is a deep, dark, dirty little secret of the industry: we don't all agree on what these two terms mean. Quite literally, one person's clone is another person's image, and vice versa.

It gets confusing, and if you're hearing different things from different people, that's why.

I'll provide what I believe are the most accurate and common definitions. Hopefully, that means you're more likely to hear people agree than disagree with what I'm saying.

Continue Reading: What's the Difference Between "Image" and "Clone"?
https://askleo.com/23456

There are, of course, nuances to and even disagreement on the term's meaning.

An image of a hard disk most commonly refers to a copy of all files, folders, and overhead information stored on the disk, including the information required to boot.

Another definition used less frequently is that an image is a copy of every sector on the disk, including those that are not used, as well as their physical layout. This is more commonly referred to as a "clone".

An image by the first definition is all that is needed for backup purposes. When restored, the files are replaced on the hard disk, but not necessarily in the same physical locations as they were originally. (One positive side effect is that often a restored hard disk has no fragmentation.)

The second, when restored, places all files in exactly the same physical location as the original and restores all unused sectors as well, thus enabling deleted-file data recovery and potentially other forensic techniques.

Are You Always Learning?

I will always remember a comment from a classmate, when we graduated from college many years ago. After he got his diploma. He commented ' I finally reached the point where I don't have to learn anything anymore'.

I replied to him that the primary purpose of a formal education was to teach us how to learn, and continue learning.

In my early school years. We had the three R's, reading, ‘riting, and ‘rithmetic ( some spelling license was taken).

For years, I've preached the three L's for seniors - Laughing, Loving, and Learning. It is unfortunate that most seniors don't want the last 'L', which is a mistake.

I feel that 'Learning' is as important now as it always has been. I'm 90, and every day, I make sure I learn something, usually more than one thing. And I try to convince others how important that is.

My One Word - Curious. My grandpa told me, back when I was but a lad, "Pat, you'd take apart a concrete block to see what makes it tick." I replied, "Grandpa, if it's ticking, I want to know why."

The single word most important to me as to how I plan, decide, and act is 'skeptical'. ('Curious' is a close second.) Hardly a day goes by that I don't receive emails - too many from those who should know better - that are obviously untrue and patently absurd. In this age of immediately-accessible information, why anyone with an ounce of curiosity or skepticism would send me such garbage is a reflection of their intelligence and an insult to mine. Even sadder is that they get quite defensive if you point out the error(s). No 'thank you for setting me straight' from them - they'd rather remain ignorant.

Why Doesn't My External Drive Appear When Plugged In?

I had this problem on Windows 7 Professional on the very same day as I received your email. Thanks to you and your email, I now have letters assigned to two removable storage devices which had not been accessible before following these steps. Thank you.

Three Domain Registration Scams and One That's Not (but is Important)

Domain registration is another opportunity for scammers to try and take advantage of you. I'll cover the most common scams, and one that looks like spam but turns out to be critically important to keeping your domain.

Read: Three Domain Registration Scams and One That's Not (but is Important)