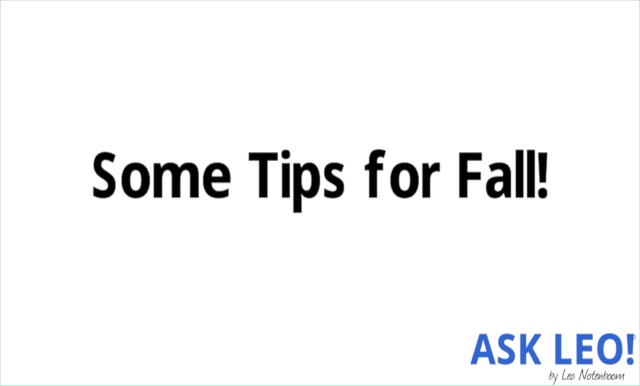 10 (+1) Tips for both those new to the internet (for school, work or elsewhere), and perhaps more importantly, reminders for the more experienced among us.

How Do I Keep Windows Update from Rebooting While I Use My Computer?

I knew Windows 10 had gotten more aggressive about updates but today it took over and restarted in the middle of a live presentation!

It suddenly announced ˜I'm restarting at 12PM save your work.' I went into settings and couldn't uncheck the time and set a new one. It didn't do a countdown, it didn't let me postpone the update, so live, in front of hundreds of people at my author event my computer restarted. Ugh!

It was a long one, too. I was ˜dark' more than ten minutes during my presentation.

Is there at least a way to set hours Windows cannot restart? I'll do a registry hack, write VB code, whatever it takes.

Actually, Windows 10 now includes an option to set exactly what you're looking for: the hours during which it should not reboot.

There are some restrictions, of course, but as long as your presentation happens during those hours, you should have what you need.

Continue Reading: How Do I Keep Windows Update from Rebooting While I Use My Computer?
https://askleo.com/23217

How Do I Recover from a Crash During an Uninstall?

Running Windows 7 Ultimate, I was trying to uninstall my Microsoft Office Professional 2010 when the PC shut down due to low power. When I later charged it and powered it on I realised the following:

I'm not sure I can. A crash during an uninstall like this is pretty serious.

I do want to give you a couple of straws to grasp at, but perhaps more importantly, I want to discuss why this might have happened, and what you need to do to prevent it from ever happening again.

Continue Reading: How Do I Recover from a Crash During an Uninstall?
https://askleo.com/23239

The term broadband typically refers to internet services provided above a certain speed.

In the past common definitions stated that broadband internet service had two criteria:

where "dial up" is a speed of 55kbps (kilobits per second).

Both of these criteria are flexible, at best. For example cellular/mobile internet may or may not be considered to be "always on", as the mobile device itself can be turned on and off. The FCC has also attempted to define broadband internet connectivity to be download speeds above 4mbps (megabits per second) or even 20mbps.

Well I'm going to suggest a more modern form of blasphemy; what's the objection to subscription? I try to operate my PC's economically to fulfil my needs. I kept a stable version of Millennium until that seemed unsustainable, I ran XP until Leo told me not to! (I still miss it). I now run W7 on my main PC and Vista on my reserve laptop, when support ends I will phase them out. (I have a download of the free W10 but have yet to test it).

This is my point, I paid about £70 for W7, W10 is advertised in the UK for around £80. If, at a conservative estimate, those systems are good for around 5 years that is an annual cost of not more than £16.

As a consumer I would be happy to pay MS up to £20/annum to ensure that I have the latest and most secure operating system. I can see advantages to a subscription system; fixed, and therefore predictable, annual costs, the comfort of knowing that you have the latest OS, no large bills when an OS goes out of support.

I am no natural fan of Microsoft, in common with many others I resented the attempt to force W10 on us even it was good for us (like school milk) but if I'm going to use a MS OS it would suit me better to pay for that privilege by a modest annual subscription than by finding lump-sums every few years.

So I don't really understand the objection to the subscription model; for most users I suspect it would offer a better way to pay for an operating system that was always up to date.

Most people objecting to the subscription model haven't done the math (the Office subscription is substantially cheaper than buying the product outright), or they're just concerned that they're establishing a long-term billing relationship with a company that they fundamentally don't trust. In particular they're concerned that the Windows 10 free upgrade was some kind of trojan horse that would force them pay something in the future. I can understand not trusting Microsoft, but the concept of forcing people to pay a subscription just doesn't make sense no matter how you look at it.

"What's the objection to subscription?" - Indeed. While I don't believe that Microsoft has any plans whatsoever to make Windows 10 subscription-based, it wouldn't be unreasonable if the company did decide to go that route. What I find interesting about this brouhaha is that Microsoft's licensing strategy is now near-identical to that of Apple and Google's - and yet you don't see people getting their panties all ruffled over the possibility that either of those companies may start to charge for OS X or Chrome OS.

It's quite possible that Microsoft or Apple or Google could decide to implement subscriptions at some point down the road, or to go back to pay-to-play upgrades - and they'd be perfectly entitled to do so. Times change, and business strategies change. But it's pretty clear that charges are not in their current plans and so people shouldn't be getting their knickers knotted over it.

It depends on the ransomware. There are as many different answers to your question as there are variants of ransomware.

Worry less about the specifics of ransomware, and keep yourself protected and safe from all malware instead. Ransomware is just malware.