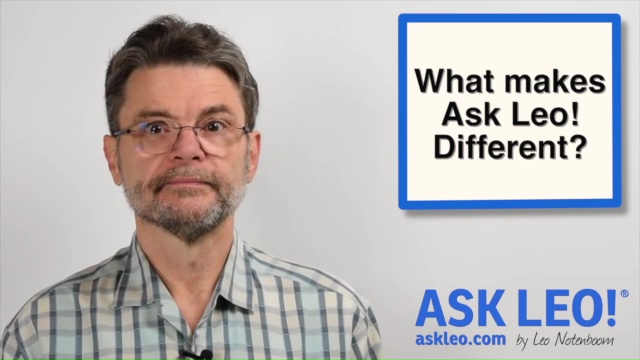 How do I decrypt files encrypted by ransomware?

… some of my files are gone, saying they have been encrypted with a public key. Files like my photos and so on. Of course they have a high fee in order for me to get them back. Do you have a solution?

That was a question I received in my morning email from a friend.

And the news is not good, because no, I don't have a solution; there's just no good way to decrypt files encrypted by ransomware.

Prevention before the fact is the only guaranteed peace of mind on this one.

Continue Reading: How do I decrypt files encrypted by ransomware?
https://askleo.com/20068

Since its introduction, Windows 10 has come under a fair amount of heat for various privacy issues.

Depending on what you read, and what's been uncovered, it does appear that not all the privacy-related issues are necessarily in your control.

However, much of it is, and much of it begins when you install or update Windows 10.

As with many other setups and installs, the "secret" is to never accept default or express settings, and always choose to customize.

Ransomware is malicious software that denies access to all or part of the information on a computer, and demands payment of a fee, or ransom, to regain access.

Typically ransomware will encrypt a significant portion of the computer's hard drive such that it's no longer accessible to the user. The encryption is often a strong public key encryption that is practically impossible to defeat. Once the ransom is paid, the person or people behind the malware may offer a method to decrypt the data and restore access. Or not, simply taking the money.

It's important to realize that ransomware is simply another form of malware, and is often delivered in the form of a virus or trojan. As such it's best avoided by all of the same techniques that one uses to avoid any malware: up-to-date and properly configured security software and settings, keeping your system up-to-date, and using safe online behavior.

Yup, it's a trade-off for sure. With Windows, OS X, iOS or Android - or any of a multitude of web services - privacy is traded for convenience and functionality. While you can turn off many of the features that require access to your personal data - Google Now, Google Maps, Siri and Cortana, for example - in doing so, you'll lose access to many of the features that make those platforms so great.

Comppanies use/track your data for one or more of 3 reasons: 1) to provide a service; 2) to improve a service or 3) to make money (while your Gmail/Outlook account may be free to you, Google/Microsoft still have to buy the hardware to store and process your data).

I really have no problem with any of this. I couldn't care less if a company tracks my browsing in order to deliver targeted ads. If I'm going to see ads, I'd prefer to see ones that were targered to my interests and that I may actually find useful (it hasn't happened yet, but maybe one day!).

The privay aspects of Windows 10 - or OS X, iOS or Android - really don't concern me at all. To my mind, the privacy trade-off is a worthwhile one for the functionality I obtain as a result.

Leo, you said, "My gut tells me that the information that's being collected, be it everything by default, or some subset thereof is, in fact, being used for your benefit and for Windows' benefit." My gut feeling is something quite different. I have been skeptical of Microsoft's corporate attitude toward it's "customers" for years. Microsoft is at best, disingenuous. And actually seems to have ruthless disregard for service to its costumers unless it affects Microsoft profits. Microsoft is essentially a monopoly (don't tell me it isn't - I have my aluminum foil hat on and can't hear you), and uses that leverage to do what it chooses to generate profits, rather than using exceptional service to its customers to attract profits. It has mostly worn off, but they were once commonly called "the evil empire", and for good reason. A current example would be that quotation from the Windows 10 ULA by Greywolf ('Finally, we will access, disclose and preserve personal data, including your content (such as the content of your emails, other private communications or files in private folders), when we have a good faith belief that doing so is necessary.'), which can be acceptable only to fools, given the growing invasive propensities of "our" government. This isn't just about software and convenience. That data collection (dare I say theft by coercion) and sharing capability, at Microsoft's whim, completely circumvents any sort of privacy legislation limiting government's unconstitutional data collection that could be implemented to protect our rights (reasonable suspicion, due process etc. - read the 4th and 5th amendments again). By using Windows 10, you sign away many of your civil liberties by blithely accepting what would otherwise be serious infringements on your Constitutional protections. You may think that if I don't want to use Windows 10, I don't have to, and you would be correct, and I won't. However, the more people who capitulate to such strategies of infringement by any entit(ies) (and I can not assume that Microsoft is benign and/or acting alone in this - we must all remain skeptical), the more emboldened "they" become, and the more leverage they have. You may even be able to disable all the "telemetry", but that does not remove that portion of the ULA quoted by Greywolf, which include the wording, "...we will access...", think, "...we will access..." meaning that turning that stuff off just causes them to do what they say they "will" do, differently. Many of you say you have nothing to hide, so be it, but your apathy weakens and strips away something from all of us that we must preserve - our liberties. And such capitulation to such an egregious infringement attempt by Microsoft will strip those away, oh so more quickly. You may think you live in Disneyland, but you don't.

Microsoft was so cute as a puppy, but it has now grown up and has rabies.

That's all. I have to go buy more foil for hats now.

I am really glad that Leo brought up that privacy issue on the table. All in all, I like windows 10 except for a few glitches here and there. However, in my humble opinion, Microsoft is starting to be brash and overbearing often to the point of becoming "dictatorial". Talking about forcing Windows updates on everyone without any control over them anymore; talking about paying 10.00$/year to play Solitaire or Minesweeper (those games used to be free in previous versions of Windows); talking about mandatory Microsoft account in order to sign in to your own computer; and finally Cortana Oh dear Cortana! once activated it's like you are an open book to Microsoft regarding your privacy. Whether it's for a good purpose or an evil one, nobody likes his or her private life to be known or collected somewhere.

Let's be clear about a couple of things:

You do NOT need to pay $10/year to play solitaire or minesweeper. You can play them for free still two ways: live with the ads that now accompany the free version, or get free alternatives elsewhere.

Signing in with a Microsoft account is not mandatory, unless you use programs or features that rely on it.

Cortana: so do you search using Google? Then you're giving Google exactly the same information. What makes Cortana worse?

Here is Ed Bott's post on this: No, Microsoft is not spying on you with Windows 10

I wish I'd kept the link to a similar article written by a Linux advocate. He basically said that, as MS is going toward a unified experience, they combined several other licenses into one. The Win 10 license is nothing new. Nor is it any worse than any other company.

Recently I visited Amazon.com to check their lineup of microwaves. Now I'm receiving ads on some sites promoting microwaves (mostly those I viewed) available on Amazon. I don't know exactly how the ad providers got my information, but it's part of the ongoing "personalized" ad movement provided by search engines, browsers, and who knows what else. I just know it wasn't from Win 10 - I haven't downloaded it yet.

During the Win 8 Beta period, one commentator mentioned that what MS gleaned from their user experience (which began in XP and about Office 2000) to help design Win 8. That included the much bemoaned removal of the Start Button and Start Menu - being replaced with the Metro-like interface. The majority of users who participated in the user experience (a yes/no option) didn't use those features. That corresponds to the few non-tech people I've encountered; their desktop was cluttered with folders/shortcuts that could have been put on the Start Menu. About all they used the Start Button for was to shut down the computer. I mention this solely to illustrate how MS uses the information sent to them. Various changes in Office and other MS software were also made based on information freely provided by consumers through the different information gathering programs.