Has it really been 12 years?

Two things in "honor" of the occasion:

First: Could I ask you to take a short survey? You'll find it here (Or here: https://go.askleo.com/survey2015). While I get a lot of information from the questions that people ask, this'll help me get a better sense of where I need to be focussing some of my efforts.

Second: As is my annual tradition, I've collected some of the odder questions over the last 12 months, and posted them - with the responses I wish I could give - here on my personal blog.

Enjoy! As always, thank you for being here.

How should I back up my computer before an operating system upgrade?

I'm about to upgrade my operating system to Windows 10. How do I protect myself if something goes wrong?

And by that, I mean take a complete system image backup of your entire computer before you begin the update process.

I'll explain what that is, and how it protects you from disaster.

Continue Reading: How should I back up my computer before an operating system upgrade?
https://askleo.com/19932

Four ways to go back to Windows 7 from Windows 10

I'm not sure I'd call it hype – Windows 10 is getting good reviews from many people, though of course, not everyone.

While my recommendation is to stick with Windows 10, I realize that's not a choice everyone is willing to make. So I'll show you the four most effective ways to go back to Windows 7, assuming that's what you were running before you upgraded to Windows 10: restore, revert, restore, or reinstall.

Continue Reading: Four ways to go back to Windows 7 from Windows 10
https://askleo.com/19980 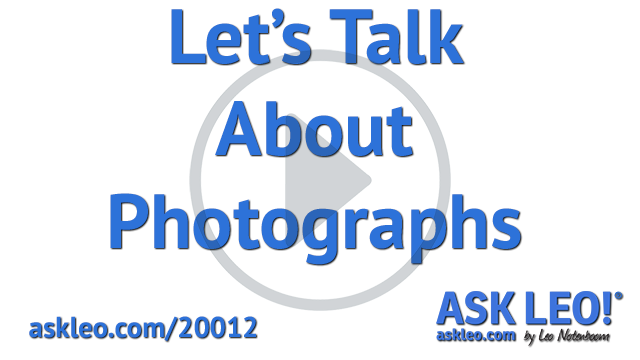 The UEFI, like the BIOS it is designed to replace, is software that's built into PCs and performs functions such as:

A UEFI typically has a user interface of some sort that is accessible (only) at power-on before any operating system is loaded. This UI, which is typically more extensive than previous BIOS UIs, allows many of the configuration options for the computer to be selected before any operating system is loaded, as well as diagnostics and other manufacturer-specific functionality to be accessed.

One of the more notable, and occasionally frustrating, features of UEFI is "secure boot". Secure boot allows the boot process to be "locked down" according to the PC manufacturer's specifications to prevent unauthorized operating systems or boot sources from loading.

Don't Be Afraid of Your Computer

Okay Leo, you finally convinced me!

How many times have I heard you say "backup" - scores, hundreds? and did I? of course not! But this time what you said about trying things and even if it turned into a disaster it could still be resolved with a full image backup - just made so much sense!

So there you go, I've been a subscriber for years and yet because you hit just exactly the right note this time you have a convert! Look forward to many more of your talks :)

I am definitely a do-it-yourself kind of guy, with pretty much everything I do. I have made a few mistakes that cost me more to get fixed than it would have to let someone just do it right the first time, but overall I come out way ahead. It's especially true of my computers. Ever since my first computer (which had two 5 1/4" floppy drives and no hard drive) I've been poking at them and trying things out, and generally keeping them in good shape, to the extent that friends will come to me for help with theirs.

If there's one thing that scares me into not doing more than I do, it's that I'm self taught, doing my research as I go, and there is often incomplete, inaccurate and/or conflicting information available to choose from. (I've come to depend on a couple of trusted websites, Ask Leo! being top of the list.)

One other thing I'll mention: While backing up is unquestionably the #1 rule, the #2 rule should be: learn how to use your backup now, before you need it. Nothing is more frustrating than a non-responsive computer that you don't know how to resuscitate, even though you know you have the tools. Believe me.

Knowing how to restore from a backup is a very good idea. But just having the tools puts you miles ahead. A worst case scenario would be that you'd have to take it into a shop and have them restore it for you. but I believe with the instructions Leo gives, it would be pretty easy to follow his instructions. You can get his book for the backup program you are using. You can print out these articles he has on restoring your computer. That way you can have it for when you can't get into your computer to read it and don't have another device to read it on.

Can't understand why people do not back up, so easy to do now. I can still remember my first computer Commodore 64, far cry from todays machines, programs if you could buy any came on tape and downloaded via tape deck. wrote small programs in dos. I download a lot of data and store it on hard drives, I have salvaged from old computers, I have bought a case with its own power cable to fit them in. Am going to download windows 10 on one of them, will keep 7 for the time being till I see how 10 pans out. Enjoy all your posts I file them all.

How should I back up my computer before an operating system upgrade?

I'd add two steps to the restore process.

Before restoring to the previous system image, make a system image back up your Windows 10 installation.

Then, after restoring the system image of the previous OS, copy all of the data files you've created using Windows 10 to your newly installed system. If you made a fresh install of Windows 10, that would include all of your data files.